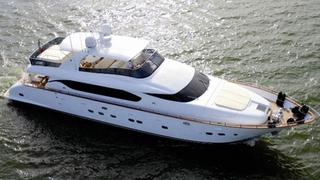 Word just in from Mark Duncan at Yachting Partners International that Gregory Gheraia will have the 27.4m motor yacht IFA Cannes at the Antibes Yacht Show from April 18th-21st.

IFA Cannes was built in 2007 to RINA class by FIPA Italiana as one of the popular Maiora 27 range. Accommodation is for up to 10 guests in four staterooms and she has a spacious interior in light, warm bamboo.

She is in excellent condition, the owner having made considerable investments last winter in deck work, interior refinishing, new exhausts, paintwork, 1000-hour engine service and so on. IFA Cannes is also MCA certified and her 5-year survey has been completed.

'The owner made some very considerable investments in her before the season,' says Greg. 'Her decks were recaulked, interior wood was refinished, shafts and props balanced, paint was re-done where necessary and exhaust risers were replaced in addition to the normal pre-season servicing of engines and generators.'