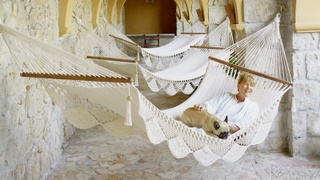 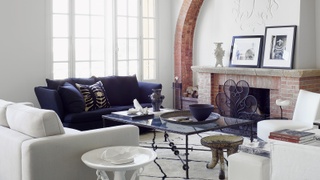 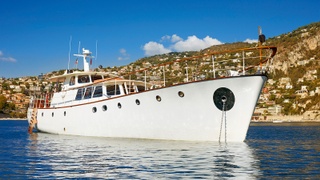 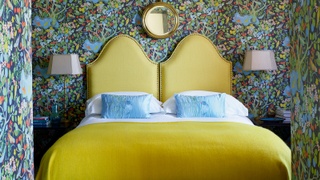 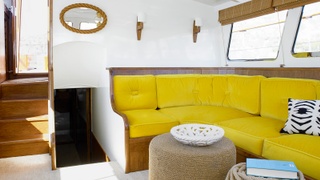 Style: they say you’ve either got it or you haven’t. In the case of Isabel Ettedgui, the former is most definitely the case – you only need to walk into her exquisite Connolly store in London’s Mayfair to see that.

In addition to being artfully stocked with the brand’s covetable pieces – from leather driving accessories to top-quality luggage and finely crafted knitwear – the four-storey Georgian townhouse is simply a lovely place to spend some time. It is more akin to a welcoming home than a retail space, with its tranquil yet interesting seating areas and atmosphere of genteel calm.

Ettedgui opened the store in November 2016, re-establishing a Mayfair outlet for the historic Connolly leather brand that she and her late husband, fashion mogul Joseph Ettedgui of Joseph stores fame, acquired 20 years ago.

Indeed, 2016 was a busy year for Ettedgui; she also relaunched her delightful 22-metre Silvers motor yacht, Life Aquatic, following a ground-up restoration by classic boat expert Stirling & Son. “I bought her in 2014 for the price of a very average car,” recalls Ettedgui. “She was built in 1952 at Silvers’ yard in Scotland and modernised in the 1970s – but after that, she wasn’t touched for more than 30 years. She even had an original set of Duralex drinking glasses in their special drawers in the galley.” She commissioned Stirling & Son to rebuild the yacht with an eye to originality, while also making her suitable as a modern holiday boat capable of accommodating two or three families without feeling cramped.

“It turned out to be a very comprehensive, two-year rebuild,” explains Stirling & Son director Will Stirling. “We had to drive out every bolt and replace 50 per cent of the timber, which comprises Honduras mahogany and a teak stem and deck. The whole interior came out and was carefully put to one side while the hull was made good. Then we replaced the interior to Isabel’s new design, renewed the deck and overhauled the original Gardner Marine diesel engines to as-new, zero-hours condition.”

Once the strip-down of the boat had begun, Ettedgui called India Mahdavi – the celebrated designer with whom she is close friends – to reimagine the boat’s interior for modern-day “aquatic life”. “I got to know Joseph and Isy years ago when I worked on their London home with Christian Liaigre, and when they bought a holiday home at Saint-Jean-Cap-Ferrat they kindly asked me to do the interior design. They then bought a village property nearby that I worked on and, after Joseph’s death, Isy moved to a four-storey, 19th-century house in the town centre called La Cagouille, for which I also created the interior – so I have come to understand her taste,” says Mahdavi, who founded her Paris studio 20 years ago. She has since completed commissions in her distinctive, often quirky style for such diverse clients as London’s Sketch restaurant, the Monte-Carlo Beach hotel and fashion brands including REDValentino and Tod’s.

“The boat was almost an extension of the house in terms of how Isy wanted it to feel; her idea was to capture the romantic nostalgia of the Riviera the way it used to be while keeping the original interior and reorganising so it was lighter, brighter, more fun and with a better flow.

“I had never designed a boat before, and I almost think that might have helped because it gave me a completely fresh vision. I went about it as though I was working on an apartment, but my lack of knowledge of the boatbuilding trade did sometimes make it difficult to convey my vision to the craftsmen,” admits Mahdavi.

In any event, the owner’s vision and the designer’s interpretation seem to have dovetailed perfectly, and Life Aquatic (a name chosen by Ettedgui’s daughter, Gigi) has provided weeks of blissful cruising since the relaunch three years ago. “Apart from being wonderful to work with, India has a fabulous sense of flow and space, something that isn’t easy to achieve in the narrow confines of a boat,” says Ettedgui. “The galley, for example, now works brilliantly and we have a master cabin – complete with its original, built-in dressing table – plus two small double cabins and a single berth. It’s designed to be suitable for entertaining, with a spacious saloon and aft deck.

“It’s the boat that was in my dreams turned to reality and, because she was designed to sail around the Scottish and Welsh coastlines, she’s hardy and robust. Last summer, we took her from the south of France to the Aegean and the Corinth Canal and she was absolutely perfect.” Even “perfect” boats, however, have to move on one day: Life Aquatic is now for sale through Sandeman Yacht Company to make way for a new project.

8 reasons to own a classic yacht

Sweet harmony: Mario Pedol on the interior design of 39m My Song