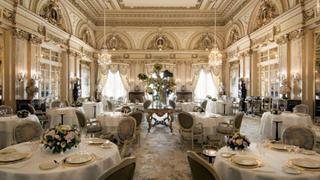 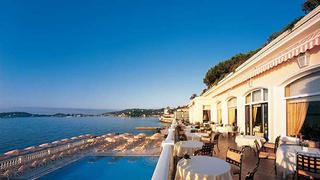 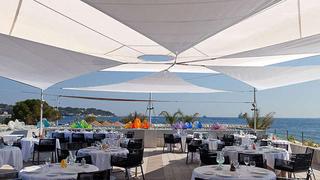 Top Restaurants in the French Riviera

26 January 2015 by Charterfleet in association with Fraser Yachts

From the never-ending rows of luscious vineyards to the untamed forests of the arrière-pays, the French nation is synonymous with fine dining. The world-renowned French chefs have taken the best ingredients from a landscape as diverse as its population and squeezed every last drop of flavour from it. With so many tastes to sample, choosing the ideal restaurant for you can prove to be problematic, albeit a pleasant problem. To ease your worries, we have compiled a list of the best restaurants in the French Riviera. So when on a South of France yacht charter, give your chef the night off and visit one if the finest restaurants in France.

A list of the French Riviera’s finest restaurants simply would not be complete without featuring an entry from its crowning jewel – Monaco. Similarly, any mention of Monegasque eateries would feel somewhat unfulfilled without the inclusion of the magnificent Le Louis XV.

In 1987, legendary French chef Alain Ducasse was charged by Prince Rainier II of Monaco with the responsibility of delivering the world’s first hotel restaurant to be awarded three Michelin stars. The monumental task was made more impossible given the four year time span that Ducasse was given to achieve it, yet less than three years later the remarkable feat became reality.

As you step into the restaurant beneath the looming 10m high ceilings, the lavish chandelier glistening in the Riviera sun, you feel like you have been transported back to the era of the restaurant’s namesake. Indeed this has been the aim of the restaurant which, in spite of its grandiose décor, is only 27 years old.

The food and service is equally impressive. Alain Ducasse’s experience has in turn been handed down to his protégé Franck Cerutti who he claims has “olive oil running through his veins”. The two chefs have masterminded an exquisite menu of uniquely local ingredients each with its own enticing titles: “The Farm”, “The Sea”, “The Vegetable Garden”. The food is, as these titles suggest, beautifully simple and yet at the same time wonderfully intricate. While it seems that plates such as Iberico Jabugo ham and figs hold few surprises, Cerutti and his team have made inspired choices at the local markets to choose the best local produce and have employed methods that make complex gastronomy seem so simple, as only the greatest chefs can.

Like the unseen flavours in each dish, the some 400,000 bottles of wine remain carefully stored in a private cellar, and while the 30 or so customers happily enjoy their meal, behind the scenes up to 21 of the world’s greatest chefs are busily working to produce some of the finest food the French Riviera has to offer.

Every year St Tropez attracts jet setters from across the globe who come in search of the luxury lifestyle the quaint Mediterranean village offers. Besides the luxury yachts moored in the harbour and the supercars that rumble through the cobbled streets, Arnaud Donckele is making sure St Tropez makes a name for itself elsewhere.

Opened in 1954, Donckele has overseen an era of roaring success for La Vague d’Or, restaurant to the famous luxury hotel La Residence de la Pinede. During his tenure as head chef, Donckele (a former trainee chef at the Gourmand-Prunier in Paris) has earned La Vague d’Or the two most recent of their three Michelin stars in 2011 and 2013. The first of the three however came in 1990, testament to La Vague d’Or’s long history of exceptional cuisine. All of this has been made possible thanks to the management’s insistence on using only the finest local produce.

Over time the methods used to harness the best of each of the region’s ingredients have been perfected. A process which continues to this day to produce a truly eclectic Provencal menu. All the dishes are entirely original, such as Donckele’s salted marshmallows with rosemary. The tempura of langoustine with bergamot oil is equally delightful, while his plate of goat and sheep cheese with pear, saffron and honey is as unbelievable for the tongue to taste as it is for the ear to hear.

All of the dishes are irresistibly light and are interspersed with unique palate cleansers such as thyme sherbert ice, a French tradition held sacred by La Vague d’Or. Meanwhile an all-French wine list with a good local selection as well as the usual entourage of wines from Bordeaux and Burgundy serves as the perfect companion to the heavenly views of the hotel’s private beach and of the distant St. Tropez port.

What would a list of the French Riviera’s best restaurants be without an entry specialising in the exquisite seafood its shores serve up? Our recommendation to all seafood lovers visiting the area is Les Pecheurs, restaurant to luxury holiday resort the Cap d’Antibes Beach Hotel.

The first thing that strikes you at Les Pecheurs is its location. Anchored at the water’s edge on the stunning Cap d’Antibes between Nice and Cannes, the restaurant offers spectacular views onto a sprawling seafront hugged by pristine beaches and the Lérins Islands and the Estérel Hills.

The views are not the only spectacle however. Les Pecheurs is another of the French Riviera’s restaurants born from the tutelage of Alain Ducasse, and newly installed chef Nicholas Navarro’s dishes bare all the hallmarks of such an education: innovative and colourful design, careful attention to detail, intense flavours and local ingredients. With this winning formula, Les Pecheurs proudly sits among the great French restaurants, with a distinguished Michelin star to its name.

Les Pecheurs serves seasonal cuisine with great emphasis on the flavours of the Mediterranean basin. The menu rotates depending upon what happens to be available in the local vegetable and seafood markets. Some invariable dishes on the restaurant menu have customers returning year on year however. The homemade lobster ravioli with langoustine broth and chorizo mousse proving a particularly popular starter.

Through his choice of high quality local produce, combined with the sleight of hand you would expect from a Ducasse tutee, Nicolas Navarro pays one of the finest tributes to the Mediterranean. It is difficult not to be won over by his emphatic inspiration. Flavour combinations that exhilarate, rare ingredients that are the very essence of the French Riviera and a smart service all sublimely complimented by the breath-taking views of the bay from the panoramic terrace. Les Pecheurs is the restaurant of a chef who is passionate about his art. An ideal place to visit during your luxury yacht charter.