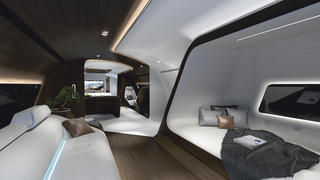 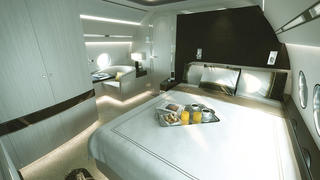 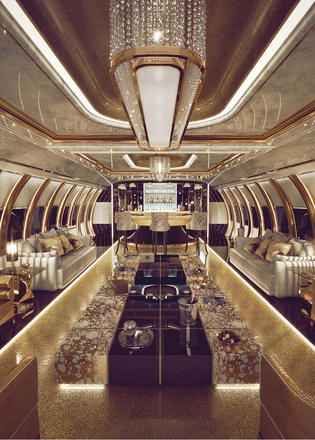 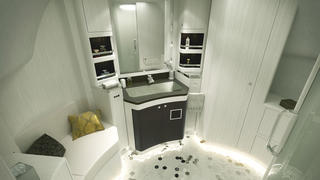 What, no casino? Why private jets are the ultimate interior design challenge

Yacht design is no longer a singular specialisation. Over the past two decades, many of the world’s leading studios have been asked to turn their practiced eyes to other high-end interiors. In particular, private aircraft design has blossomed from a niche within a niche to a fully fledged arm of the luxury interiors market.

But it’s not simply a case of transferring the aesthetic and ethos of their ocean-going residence or country house or urban apartment into an aircraft. Despite the design crossovers between each genre, aviation design is challenging in the extreme. Creating interiors for swift global travel is a very different prospect from a boat or holiday home and, as a result, even the industry’s long-established specialists are exploring new ways of shaping these rigorously defined and regulated spaces.

Andrew Winch, founder of London-based Winch Design, has had a dedicated aviation studio for more than 15 years. The first aircraft he refitted was a BBJ2, Boeing’s business variant of the venerable 737. Over the years, Winch’s aviation division has produced some startling concepts and built projects, most of which take a different tack to the firm’s yachting and architectural portfolio. “I’m not excited by replicating design — it’s not my enthusiasm,” Winch says. “Why would you want your private yacht to look or feel like your plane or home?”

Since 2002, the studio has delivered 14 jets, with two more being finished this year. “These aren’t fast projects — the attention to detail is probably more complicated than any design we do,” he says. Concept design helps shape the studio’s own vision and inspire new client ideas. Winch was involved in creating a spectacular 3D walkthrough of a Dreamliner-based private jet when Boeing’s 787-9 was being launched, working in collaboration with Lufthansa Technik. Though that design was never built, a client subsequently commissioned a similar scheme for their Airbus A320.

The contemporary superyacht is more than a home from home — it also functions as a mobile business headquarters, secluded retreat and entertainment centre. “The key factor for us is always understanding the client’s experience,” says Winch. This principle applies equally to aviation design, albeit their demands have to be filtered through the strict rules of international aviation. “One of the things we do right from the start is discuss with clients about their protocols and programs — how do they arrive, for example; which door will they use,” he says. This is where the singular function of the private aircraft comes into its own.

Designer Peder Eidsgaard agrees. Though there may be many synergies between the aesthetic of a yacht and a jet, he says the differences in the design process are more acute. “For a jet, the interior weight is fundamental and might affect the very purpose of the aircraft — the range,” he says, adding that “the complications that come with nearing the speed of sound travel are severe.” Eidsgaard’s aviation subsidiary, Pegasus Design, builds on the extensive experience of his renowned yacht studio but also accentuates the differences between each. “A yacht is a holiday home, while the jet is considered a business tool,” he says.

That said, he points out that during the past 10 years there has been a significant shift in attitude, and certain clients are willing to pay extra for interiors that resemble their yachts or homes, “which has resulted in the V-VIP category.” Eidsgaard and his team are working on support aircraft, especially helicopters, in this V-VIP sector. “We’re working with Airbus Helicopters on the H160 and H175. The latter is their flagship and the first one was delivered to the highest level of craftsmanship, to be placed on the top deck of motor yacht Dilbar.”

Like Eidsgaard’s V-VIP category, Winch says that aesthetic crossover between a client’s home, yacht and plane is often a feature, but it is best translated by “branding” the portfolio. In the case of Winch’s 99 metre superyacht Madame Gu, that meant giving the military-spec Eurocopter a custom-built interior and livery to match the yacht’s twin carbon-hulled tenders.

“Colour has a bearing,” says Winch. “You’re up above the clouds, often in very bright light. So you often have more walls and fewer windows — it’s a womb-like enclosure. We’ve just finished a plane with a library in the bulkheads. It’s an environment of calmness and contemplation.” Even the absence of views can be catered for. “You can install cameras or screens — nose, tail and underbelly — to connect the passengers to the moment of take-off or landing. You can even track your own yacht as you fly over it.”

The regulatory challenges of aviation design are legion, with every last piece of material needing to be fire-tested and assessed for strength and weight. But provided a client is willing to pay for it, the jet offers the more adventurous a perfect space for experimentation. Designer Celia Sawyer, a speaker at the Superyacht Design Symposium 2017, has spent most of her career creating extravagantly bold homes and boats, with characteristically vibrant use of colour and form. “Some clients like expressing themselves a little more on the aviation side,” she says. “They might have a very classic style at home, but want something more outrageous in their aircraft.”

Sawyer says she is getting younger clients and they’re often more flamboyant. “Cinemas and spas are normal,” she says. “There’s a lot of entertaining — a current client wants a casino. You have to make it as comfortable as possible — with gadgets and entertainment.” There’s also a hint at the heightened risks that come with operating in certain territories. “Some people want really good defence systems on their planes,” she says.

For owners of Embraer Phenom private jets, one way of keeping up with the latest technology is to order a refit. The recently launched ACE package allows owners to enhance their interiors with lightweight, high-performance materials with exposed structural elements and fine detailing, drawing on aviation technology for inspiration. “The ergonomics, craftsmanship and design begins in the cockpit and echoes throughout the cabin, sharing the experience of the pilots with the passengers, who become ACE members — at least for a flight,” explains Jay Beever, Embraer’s vice president of interior design.

The emerging crossover between traditional transportation design and the new aviation demands is taking the futuristic aesthetic of the concept car into the sky. Mercedes-Benz Design, a subsidiary of the German carmaker, is branching out into yachts, architectural interiors and aircraft, including a bespoke Eurocopter EC145. Mercedes-Benz Design is also blurring the edges of aviation design through its collaboration with Lufthansa Technik to transfer elements from the recent F 015 autonomous concept car to the cabin of short- and medium-range aircraft. Other automotive brands are pushing into the aviation sector, too. BMW’s well-established Designworks studio and Peugeot’s Design Lab have both used private aviation as a test bed for forms, materials and technologies.

Private air travel is no longer focused exclusively on the destination, and the myriad possibilities of aviation design are only just opening up. As the gulf between exotic concepts and the certification-clogged reality make clear, jet interiors are still a major challenge for designers of all stripes. But as many yacht designers are discovering, their clients still want to fly high in style, meaning that research, innovation and exploration are playing a bigger role than ever before.

Everything you need to know before buying linen for your yacht

Inside track: The yacht interior design brands to know this season