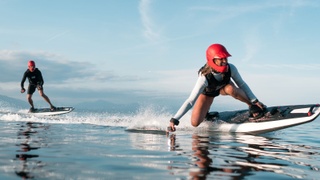 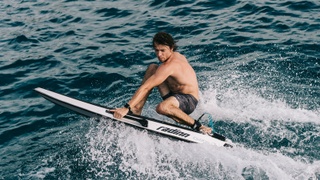 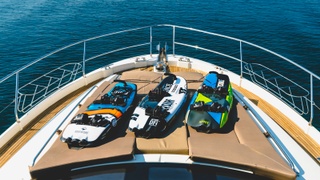 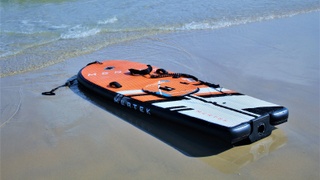 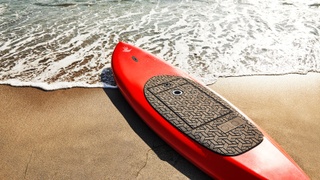 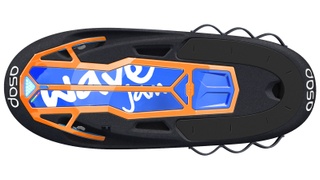 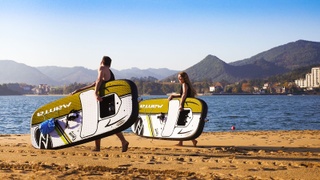 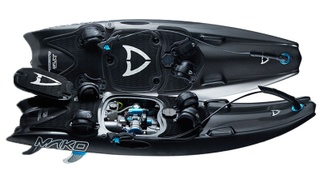 No superyacht toy garage is complete without a jet board. By far the coolest way to get around, choose from electric or petrol-powered and blast across the ocean at up to 40mph. Here are the best jet boards money can buy…

This electric jet board is designed for fast straights, sharp corners, and superlative acceleration. Built in carbon fibre, the Awake RÄVIK can reach a top speed of 35mph and can go from 0-30mph in just four seconds. Whether you want to race a friend or pootle about bays, a mobile phone app provides the rider with four rider modes depending on your mood or experience; KIDS, ECO, SPORT and EXTREME. The board is controlled by a wireless throttle, weighs 35kg, and can run up to 40 minutes.

Radinn’s G2X boasts an ultra-quiet, electric motor capable of pushing the jet board to a top speed of 36mph. Even for avid surfers, that’s pretty fast over open water. It’s controlled by a wireless, handheld remote, while a series of LED indicators let the rider know how much juice is left in the battery. After 45 minutes of ride time, simply the swap the batteries and you’re good to go for round two. Opt for a speed charger which will power up your spare in just 2.5 hours. The hull is made from a Military grade impact resistant polymer which means it's made to last.

Jet Surf is known for their fast, petrol-powered jet boards, from its Adventure model offering up to three hours of cruising, to its top-of-the-line Race Titanium model, which has an eye-watering top speed of 40mph. But, 2020 will see Jet Surf introduce an all new electric option to its line up. Maintaining the same DNA as the rest of the Jet Surf family, the Electric model has a full carbon fibre hull made for perfect manoeuvrability and speed (and only weighing 29kg).

Mertek's electric surfboard is inflatable so it's easy to move around and less prone to damage. Perfect for superyacht stowage, it folds down to a third of its full size. Controlled by a wireless remote with eight-speed settings, the board can run for an hour at a standard speed and can reach up to 16mph. A hydrofoil fin allows the board to skim the water (so there's less bump from the waves). There’s a handle on both sides making it easy to climb up from the water and hold on when using it like a body board.

The carbon fibre jet board is electric-powered with a swappable battery system that takes just 30 seconds to change over, so you can spend more time out on the water and less time faffing with batteries. A swallow tail allows for greater hold and traction, while twin fins let you carve through the water with ease. There's a bluetooth throttle control, LED battery level indicator and a glove compartment to store valuables.

The Wave Jam is designed for a thrilling ride on the water that requires relatively little balance or skill. This souped-up bodyboard has a top speed of 10mph and almost an hour of run time. A three-speed setting means you can set the pace, and to steer you simply lean in the direction you wish to go. It’s light – just 24 kg – and compact so perfect for any superyacht toy box.

Onean's Manta model is perfect for those who prefer a slower place to life. With a top speed of 6mph and up to six hours of battery life, you can hop on and head off on a long and lazy afternoon trip. The Manta is simple to use and controlled by a wireless remote. Press once to set the power to 50% and then again for full throttle. Measuring 230cm long and 90cm wide, the board is super stable and there is even room for you to pack a picnic.

Power across the ocean for up to 90 minutes with the Mako jet board. A two-stroke engine offers a top speed of 55km/h while the board remains one of the lightest on the market at just 20kg thanks to its carbon fibre body. The engine is started at the touch of button and a handheld throttle allows you to accelerate with ease. Should you fall off, a safety shut-off pin will cut off the engine in an instant. A tool-less fin system means you won’t have to fiddle about with screws so you can get out on the water faster.

The Best Stand Up Paddle Boards

Inside the Best Superyacht Toy Garages

The Best Personal Submarines for Superyachts