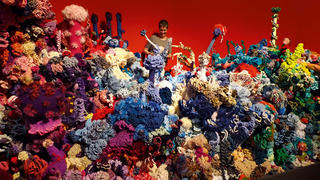 To celebrate the tenth anniversary of Margaret and Christine Wertheim’s marine awareness art project the Museum of Art and Design in New York will be hosting a new exhibition, Crochet Coral Reef: Toxic Seas, this autumn.

The exhibition will chart the ongoing evolution of the Crochet Coral Reef project which the Wertheims, in association with LA-based organisation the Institute for Figuring, have constantly updated and evolved over the past decade in response to the growing threats to the oceans through rising temperatures, ocean plastic and pollution.

The Crochet Coral Reef project began in 2005 as a response to the huge devastation of the Great Barrier Reef and is handcrafted from a mix of traditional yarn and plastic rubbish. Over the past ten years many volunteers have joined the project from across the globe turning it into a worldwide collective of artists helping save the oceans.

MAD’s exhibition will focus on three main habitats: the Coral Forest of healthy colourful marine life, the Bleached Reef showcasing the plight of coral caused by acidification and rising temperatures and The Midden, a fishing net suspended from the museum’s ceiling bringing light to the dangers caused by ocean plastic pollution.

"When Christine and I started the project a decade ago, we joked that if the Great Barrier Reef ever died out our crochet reef would be something to remember it by," said Margaret Wertheim. "Now scientists are saying this might really happen, so the project is racing against time. Living reefs, with their immense taxonomic diversity, have evolved over vast stretches of time, and so too the diverse ecology of our crochet reefs results from an ongoing evolutionary process in which our community of contributors continually expands and builds on what's come before."

Crochet Coral Reef: Toxic Seas is on at the Museum of Art and Design, New York from September 15, 2016 to January 22, 2017. Visit madmuseum.org for more information.

16 photos from The Ocean Awards