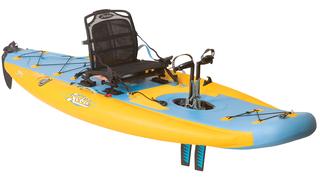 An ever-popular staple in the superyacht toy box, Hobie has just introduced a new range of inflatable kayaks to its fleet that are ideal for a 2016 upgrade.

The i11 kayak joins Hobie’s current range, which includes the space-saving i9, i12 day kayak and two-seater i14, and offers all the mod-cons expected by modern water sports enthusiasts.

The kayak’s signature low profile combined with Hobie’s Vantage seating system means the vessel looks more like a surfboard equipped with a seat than a traditional kayak. The seat can be easily adjusted for maximum comfort and, handily, can also be removed and used as a beach chair when you reach your destination.

The kayak base is formed of three air chambers with an optional fin at the bottom of the hull for extra stability, making the vessel ideal for anglers. Those planning to spend all day on the kayak will also enjoy the new optional H-Crate – a storage system for fishing gear or a cooler for food and drink.

All the models in the Hobie kayak range come with the brand’s patented MirageDrive propulsion system which promises a smooth ride and allows you to go much further than would be possible in a traditional kayak. However, if you are looking for a little exercise, the MirageDrive can simply be replaced with the plug and paddle provided. Sail Kits are also available for the new look i9, i12 and i14 models.

Kayaks are one the best water toys for both private and charter yachts as they can accommodate a number of activities, including fishing and exploring smaller coves and beaches. They can also allow nature fans to get much closer to animals than would ordinarily be possible, as demonstrated in a recent adorable video of a seal playing footsie with kayakers.

Video: The incredible custom toy that looks like a swordfish