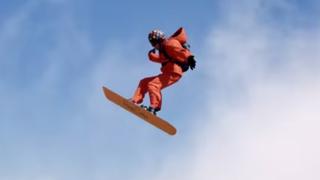 How to go snowboarding in the Caribbean

As any skiing or snowboarding enthusiast will tell you, the worst thing about winter sports is the summer. While everyone else is out enjoying the sunshine on their Caribbean superyacht charter they are eagerly awaiting the return of cold air and heavy snowfall. But what if there was another way?

Well thanks to the team behind the new Happy Socks campaign now there is. Inspired by the view out of a plane window when cruising above the clouds and intended to convey a feeling of complete freedom, the film depicts a man on a mountain searching for snow – eventually finding it while dangling 6,000 feet above the ground from a helicopter and ‘snowboarding’ at 80 mph on the clouds.

While the subject matter may seem a little strange for a novelty sock brand, Happy Socks was founded by two friends who wished to spread a little joy by turning an everyday object into something bright, creative and fun. The new film embodies this same sense of creative freedom with the idea being to spread it virally, rather than physically, using the hashtag #HappinessEverywhere.

There’s no denying it looks incredibly fun, if just a little scary, so next time you have a guest on your superyacht who prefers snowboarding to sunbathing why not ask your heli-pilot to give it a try?

Could you live on a melting iceberg?