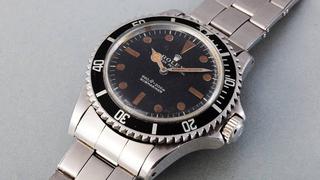 James Bond’s Rolex Submariner is up for auction

Few and far between are the serious sailors who don’t own a classic Rolex Oyster Perpetual Submariner - so how to set yourself apart on the racecourse? By getting hold of something unique of course.

While you could employ the customising talents of George Bamford and the Bamford Watch Department, if your style leans more towards the vintage then it doesn’t get much better than a one-off timepiece worn by a real James Bond.

Often thought to be one of the best James Bond watches, the Rolex Submariner 5513 worn by Roger Moore in classic 007 movie Live and Let Die is set to be auctioned in Geneva next month. Fans of the film may have fond memories of the timepiece after its bezel – which doubles up as a mini buzzsaw – helps free Bond from constraints while a concealed magnet later allows the spy to unzip Bond girl Miss Caruso’s dress.

The timepiece will be part of Phillips’ Watch Auction: Two and comes complete with Bond memorabilia including three framed black and white stills, the Live and Let Die movie tape and the catalogue from a 2001 Christie’s auction in which the watch was previously sold.

Technically, the Rolex features a 39.5mm steel case with masculine black bezel and dial and the classic round and rectangular time markers. As the movement has been removed this is a piece purely for collectors but is made particularly special by the caseback which bears the legend ‘Roger Moore 007’ signed by the man himself. Phillips estimate the piece will sell for between £100,000 - £165,000.

While the Bond Rolex is undoubtedly the star of the show, it is being auctioned alongside a number of other horologically important timepieces. Among the key lots is a unique and utterly beautiful enamelled Patek Philippe pocket watch, an extremely rare 1929 Audemars Piguet platinum watch with Breguet numerals and an intriguing ultra-light Richard mille tourbillon.

The James Bond Rolex Submariner 5513 will be auctioned by Phillips at The Geneva Watch Auction: Two on November 7-8. Visit phillips.comfor more information.

5 of the best James Bond watches