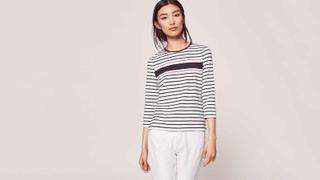 ME+EM: The British brand putting a modern spin on the classic Breton stripe

ME+EM, the low-key yet glamorous British label, is the go-to stop for a Breton top. When the Duchess of Cambridge was pictured wearing her cobalt blue version at the Beaufort Polo Club in 2015, she put the small British brand on the map and instigated a 5,000 strong waiting list. It’s a testament to the vision of founder Clare Hornby, who ditched a career in advertising to set up the elegant yet wearable women’s clothing label in 2009.

So it comes as no surprise to learn that she teamed up with Georgie Ainslie to create a piece of clothing to be worn by the female members of the Land Rover BAR team out in Bermuda. The challenge was to create something tasteful and stylish that could stand up to the uncomfortably hot conditions. Together, they hit upon the idea of remodelling the classic striped Breton top.

“We’ve combined a number of influences including a strong nautical heritage,” says Ainslie. “The America’s Cup is linked to Queen Victoria, who initiated the race in 1851 when it was launched on the Isle of Wight where Ben and I now live. The Americans won that first contest and took the trophy home and named it the America’s Cup.”

“Working with Georgie was wonderful,” says Hornby. “Our design takes the enduring values of history and combines them with the ingenuity of modern design.”

Another influence was Coco Chanel, ultimate fan of the Breton style, known to the French as the marinière. The pioneering fashion designer used to wear the iconic striped top herself after seeing it on sailors during her seaside holidays.

“Coco Chanel was so chic,” says Ainslie. As well as wearing the Breton style, Ainslie explains that “she had a pair of palazzo pants that Clare at ME+EM was inspired by, which really are just sophisticated tracksuit bottoms!” In those days, she says, everyone on a boat was wearing elegant, comfortable clothes. “That’s what we are going for with our Breton top.”

Breton top, £55, meandem.com. A percentage of proceeds from sales of the America’s Cup Breton top will go to the 1851 Trust.

7 of the best Breton tops for women

The best Breton tops for men