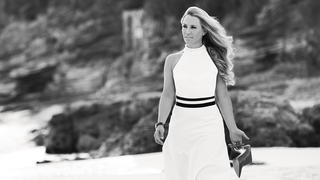 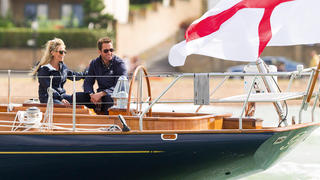 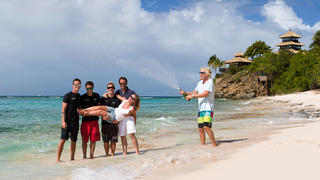 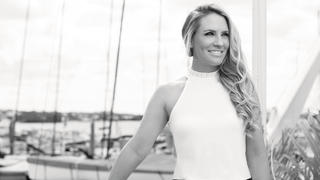 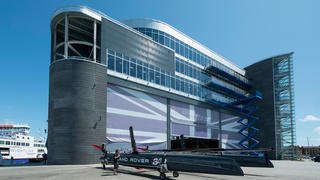 Full tilt: Georgie Ainslie on the America's Cup and living life in the fast lane

As you’d expect of the woman behind the man leading Britain’s America’s Cup challenge, our guest editor Georgie Ainslie lives life at full tilt. Stewart Campbell tries to keep up with her...

Georgie Ainslie would obviously have preferred it if her honeymoon hadn’t ended up as headline news, but when you’re married to the world’s most famous sailor – and when your boat almost collides with an island – you’re going to generate a few column inches.

It was in the second week of Ben and Georgie’s honeymoon in the BVIs aboard their 20 metre sloop Rita that their in-mast furling system broke off Virgin Gorda. “We had the sail stuck half in and half out,” Georgie remembers, “and we were heading, with some pace, towards the Yacht Club Costa Smeralda.” Unable to fully furl the mainsail, and with winds picking up, it became “like a really slow motion version of the movie Speed”, Georgie says. “I played the role of Sandra Bullock and tried to steer the boat as steady as I could, while three or four guys from Necker Island were trying to help Ben cut the sail down.”

Disaster was averted but not before word was leaked (by none other than Richard Branson) and newspapers the world over had the story – “Ainslies rescued by Branson!” Fortunately, though, this is one couple used to the spotlight: Ben, the four time Olympic gold medallist and America’s Cup winner; and Georgie, one of the biggest names in sports broadcasting.

Things haven’t become any less crazy for the couple since then. In the three years they’ve been together, they’ve married, moved countries twice, changed houses three times and had a beautiful baby girl – Bellatrix. Then there was the small matter of launching an America’s Cup campaign, the best funded, best prepared tilt at the Auld Mug in the history of UK sailing. “Sometimes Ben will turn to me and say ‘can we just stop?’,” Georgie says, “because we are 100 miles an hour all the time.”

Relentlessness is a life philosophy for Georgie, a woman who’s never just dipped a toe into anything – it’s both feet or nothing. She started her career as a runner on morning television programme GMTV and worked her way up the production ranks until the opportunity arose to do some on-air work at the Cannes Film Festival. “I found out being in front of the camera was something I really wanted to have a go at.” She cobbled together a showreel and sent it round, with one copy ending up on the right desk at Sky Sports, which was launching an audacious live sports news channel and was looking for talent.

Georgie got the gig, becoming one of the first presenters on the new Sky Sports News. She earned her live television stripes at Sky. “From very early on I was broadcasting from the US Open, Celtic Manor during the Ryder Cup; we were doing Wimbledon reports and broadcasts from the Champions League final.” She began presenting Sky’s Formula One coverage in 2013, but struggled with the demands. “When you sign up for something like Formula One, you effectively sign off on your life for that time. You spend six months of the year in a hotel room, which is great if that’s what you want, but I wanted to get married and start a family.”

She met Ben the same year. Her friend and fellow Sky TV presenter Sarah-Jane Mee took her to an event in East London, where she found herself sitting at his table. “We literally did have that moment where you look across the table and somebody catches your eye and you think ‘crikey, this could actually be something’.” They became a couple shortly after but were dragged apart by an unexpected job offer from the US for Georgie to co-present a sports talk show with Regis Philbin, and by Ben signing up with Oracle Team USA for the 2013 America’s Cup in San Francisco.

Georgie was live on air on 24 September that year, watching a muted monitor as Ben hauled Oracle back into contention for the Cup, bringing the scores level at 8-8. “It was the hardest broadcast I’ve ever had to do. I just had to keep it together, while keeping one eye on what was going on.”

She wasn’t going to miss the final day’s racing and flew 2,500 miles with her parents across America to watch Ben help take Oracle Team USA to victory – one of the greatest comebacks in the history of sport. She was back on air in New York the next day.

In these last mad weeks before the America’s Cup finals in Bermuda, Georgie is right back in the middle of the maelstrom, this time with Bellatrix, who arrived in July 2016. Georgie’s is not only a supporting role – she does regular Facebook Live presentations from the team’s camp in Bermuda and is a key part of the 1851 Trust, Land Rover BAR’s charitable arm. She’s also about to start the 1851 Club, “which is a group of people that will support and help us fund various projects in the name of the Trust that will help bring kids forward, whether it be in sailing boats or within the technology arena”. Then there’s her role at the head of the considerable Land Rover BAR family, “helping wives and families feel like they’re part of the action”.

Wife, mother, television presenter, charity patron and now guest editor of Boat International – “there are a lot of plates I’m currently spinning!” she says. “I’ve always been the sort of person who likes to have about a million things on the go at once.” But she’s ready to apply the brakes when the America’s Cup concludes in late June. Whether the Ainslies come home with the Cup or not, they’re both looking forward to returning to their home on the Isle of Wight in July for Bellatrix’s first birthday.

“Hopefully we’ll bring a bit of the Bermuda sunshine with us,” she says. “And after that, I don’t really care – because we’re going on holiday for a very long time!”

The June issue of Boat International guest edited by Georgie Ainslie is out now.

Dear husband: A letter from Georgie to Ben Ainslie on the eve of the America's Cup