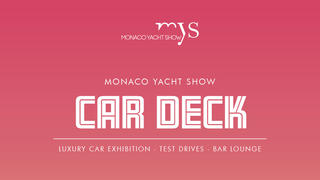 The organisers of the 2016 Monaco Yacht Show have revealed that they will be adding a brand new attraction to this year’s event: Car Deck.

Dedicated to luxury automobiles, the exhibition space follows similar events such as the Rolls-Royce Summer Studio in Porto Cervo and aims to capitalise on the interest in high-end cars that superyacht owners bring to streets of Monaco every year during the show.

Situated on Quai Rainier II in Port Hercules, the Car Deck will see some of the most iconic motoring brands positioned alongside a spectacular collection of the world’s finest superyachts.

Key features will include a 230 square metre indoor bar-lounge, while the cars themselves will be exhibited outdoors and will be made available for test drives throughout the four-day show (September 28 – October 1).

In a statement, the show organisers added, “The launching of the Monaco Yacht Show's new exhibition area for prestige automobiles is an integral part of the development strategy implemented three years ago to further enhance the show's ultra-high-level offering and thereby attract a new wealthy audience, both regional and international, to the quays of Port Hercules.”

At the time of writing, no luxury car brands have been confirmed for the 2016 Monaco Yacht Show and the exhibitor list is yet to be published.

However, with the show’s 25-year history of attracting the most prestigious names in the world of yachting (and an official partnership with Monte Carlo Limousine), it will surely have no trouble in tempting the best of the best from the automotive world as well.