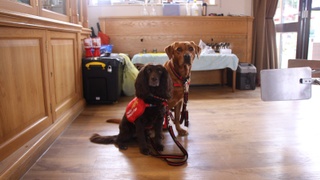 The second annual Superyacht Charity Guns event returned to the Royal Berkshire Shooting School on Friday, July 5 with 19 teams from the superyacht industry taking part. The competitive event was organised in support of the charity Medical Detection Dogs, which trains dogs to detect the odour of human disease.

This year's edition saw over 70 people participate and raise a little over £21,000 for the charity. Industry participants included the likes of yacht designers H2 Yacht Design and brokers Burgess and Thompson, Westwood & White Yachts. Also in attendance was the charity's patron, Betsy Duncan-Smith, who was accompanied by her very enthusiastic spaniel.

From the group of superyacht brokers and designers, crew placement companies and yacht security firms competing, three prizes were awarded to the best shots. Neil Sherman from Sensory International and Caroline Taylor from Burgess took home the title of Top Gun and Top Lady respectively, while Aston Martin Works were awarded Top Team.

Alongside the day's competitive shooting, the Superyacht Charity Guns included an auction of sought-after prizes, including a paramotor tandem flight and a morning’s shoot for four people at the Royal Berkshire Shooting School. Attendees also had the chance to bid for tickets to the 2020 Monaco Grand Prix and a day’s fly fishing on the River Test.

Preparations for the event's 2020 edition are already underway.