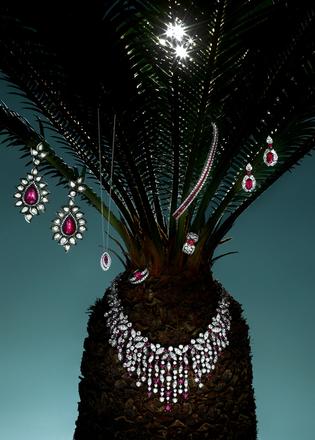 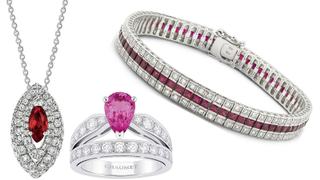 Red setters: How rubies became the stones to be seen in

Emeralds have been the precious gem in the spotlight over recent years, with several high jewellery collections devoted to them, but now attention has shifted from cool, verdant green to hot, rich red as rubies become the stone of the moment.

The return of a stone whose colour signifies passion and revolution may seem logical in such unsettled times but the reasons behind its rise may be more prosaic. Rubies are much rarer than diamonds, especially at the top level of deep colour and clarity, often referred to as “pigeon’s blood”. With growing numbers of the elite chasing gems for investment, this rarity is rubies’ calling card – a recent auction price of $1.2 million per carat for a very exceptional stone exceeds anything yet paid for a white diamond (coloured ones make more), though totals are smaller because huge rubies do not exist. Really big stones like the famous Black Prince’s “ruby” in Britain’s Imperial State Crown have been found by modern analysis to be spinels, in this case a 170 carat example that has belonged to the British crown since the 14th century.

Politics and modern economics have a role to play too. Burma is the classic source of top-quality rubies and now that the embargo put on importing the stone by the US during Burma’s military dictatorship has been lifted, the Rohingya crisis notwithstanding, interest from the States has snowballed. Meanwhile, the recent discovery of extensive ruby deposits in Mozambique, being mined on an ethical basis by Gemfields, has brought more stones to the market and further piqued interest, to an extent that Christie’s London jewellery director David Warren has not seen in 40 years in the business. He points out that Burmese pigeon’s blood stones are still by far the highest priced, “but other Burmese stones have a beautiful, brilliant, cherry red colour that is very appealing if not such an investment. There are also very top-quality Mozambique stones, though it is rare to find a very large one”.

Some jewellery brands, such as Fabergé, choose Mozambique stones for their ethical provenance – it uses them for a mystery-set version of the classic egg pendant. Piaget also chose a wonderful set of graduated, rectangular Mozambique rubies to make a stunning, warm-toned necklace for its new Sunlight Journey collection, and Niquesa uses one, richly vivid Mozambique stone, flanked by marquise emeralds, as the centrepiece of its diamond pavé Rose of the Desert ring.

For many designers, the quality and colour of the stone, and the design inspiration it creates, is more important than the source. The classic high jewellery combination is to mix the richness of rubies with the bright fire of diamonds. The way designers do it is varied, and is often inspired by the rubies they have managed to amass.

Amrapali had the luck to discover two large, matched pear-shaped rubies that it has set in a beautiful, Indian-style frame of rose-cut and pavé diamonds for flamboyant earrings that would grace a maharani, while Bentley & Skinner’s tight set collection of small rectangular stones, placed between diamond rows, makes a luxurious yet understated, modern yet art deco-influenced bracelet.

Niquesa makes the most of one, quite modest marquise ruby by framing it doubly with a similar shape in diamonds to make a very special pendant, while both Chaumet and Harry Winston make a single, top-quality ruby the centrepiece of a standout ring, the former in their signature shaped double ring, the latter as the fulcrum of a lavish pavé band.

David Morris’s matched oval rubies, with sizeable diamonds and an extra ruby above, make for sophisticated, opulent earrings. Meanwhile Graff’s ruby and diamond necklace is a work of the jeweller’s art, a cascading fringe of diamond leaves and buds punctuated by a mass of small but significant rubies.

Whatever you choose you’ll be sure to make a statement on or off board in the hottest stone of the season.

Going for gold: Statement jewellery perfect for the beach club