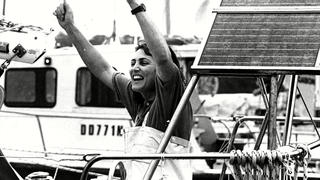 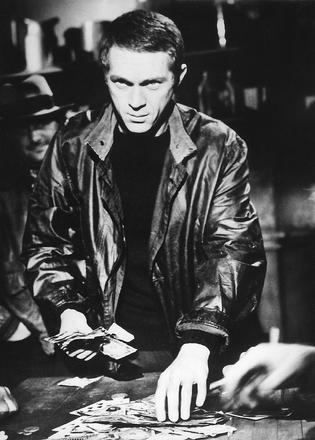 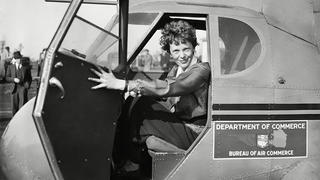 At first glance you may wonder what Belstaff, the British firm that made its name outfitting motorcyclists from the very early days of the sport, has in common with things nautical. But consider this: in the 1960s it produced one of the best sailing jackets in the evocatively named Belstaff Foul Weather Parka, manufactured for the Royal Navy in brightly coloured heavy-duty waterproof nylon, with fully taped seams, a drawstring neck toggle and an integrated neck support/flotation aid.

And now, half a century later, Delphine Ninous, Belstaff’s creative director, tells me: “This spring’s women’s collection was actually inspired by intrepid seafaring women, like Australian-born Kay Cottee, the first woman to navigate the world single-handedly, non-stop and unassisted, in 1988, and Krystyna Chojnowska-Liskiewicz, who, in 1978, became the first woman to sail solo round the world, withstanding an epic voyage of 401 days.”

More commonly, Belstaff is associated with those who have a passion for riding on two-wheels. Bikers such as Steve McQueen wore Belstaff, and it is said that TE Lawrence (of Arabia) did too. In more recent times the list includes Ewan McGregor and David Beckham. Che Guevara also wore a Belstaff jacket, when in 1952 he undertook a trip around South America as a 23-year-old medical student, with his biochemist friend Alberto Granado, on a single-cylinder 1939 Norton 500cc steed.

Sometimes Belstaff was worn by actual adventurers – such as Amelia Earhart, who in 1932 became the first woman to fly across the Atlantic solo, and Amy Johnson, the first woman to fly solo from Britain to Australia. Today, British aviator-adventurer Tracey Curtis-Taylor follows in their footsteps: a Belstaff ambassador, earlier this year she completed a 27,000km flight across 23 countries from England to Australia in her 1940s biplane, Spirit of Artemis.

Belstaff can claim mountaineers, too. In 1977, Sir Chris Bonington wore Belstaff to make the first ascent of the 7,285 metre Baintha Brakk (known as The Ogre) in Pakistan. The peak is notorious for being one of the toughest in the world – after Bonington made it to the top, it took another 24 years before the second ascent in 2001.

Modern day adventurers such as Levison Wood and Sir Ranulph Fiennes still take comfort in the brand’s qualities. “Belstaff is steeped in exploration and the British outdoors,” says Fiennes. “Both things to which I’ve always been very close.” For a man who is used to braving the elements, performance and comfort are key: “I like to be comfortable, and that’s always the case in Belstaff clothing.”

Belstaff was born in the industrial north of England in 1924 and rose, like the phoenix that has become the brand’s symbol, from the ashes of WWI. Founded by Harry Grosberg and his father-in-law, Eli Belovitch (the label’s moniker comes from combining “Belovitch” with “Staffordshire”, the site of the first factory), the brand was forged from a business that originally traded in reclaimed fabrics and rubber, and made waterproof fabrics for the military during the war. Under the Belstaff name, it started to produce its own protective wear and equipment, outerwear, footwear, tents, covers and bags. An early ad declares the Belstaff Manufacturing Company Ltd as “Motor Clothing Specialists” and “Manufacturers of Waterproof & Rainproof Garments, also Camping Equipment”.

Another ad, from the 1920s, is for “FLYING SUITS”, and addresses the reader with a call to action: “AVIATORS, RACING CAR DRIVERS and MOTORCYCLISTS”. This was no fashion company, but a maker of tough products for tough uses.

Take a close look at an early Belstaff Trialmaster jacket from the 1950s (there’s one in the company archives and the modern version is an off-duty essentials for serious sailors) and you see this clearly. Made from high-grade closely woven fabric constructed to give excellent tensile strength, it’s tough, hard wearing and thorn proof. The material is treated with a special patent process against rot and fungus, while surface grease-proofing repels storm rain. This isn’t a jacket, it’s a classic piece of engineering. No wonder the Trialmaster is still in the collection to this day.

While Belstaff may now have moved into the pantheon of luxury goods, with stores on the major fashion shopping streets of the world, there is still at its heart the grit of functionality. Grit can produce a pearl, of course. Today’s CEO, Gavin Haig, says Belstaff has survived because of this grit – it has always understood its purpose: “Now, as for the last more than 90 years, the Belstaff mission is all to do with providing a service to its customers. And that can be summed up by one phrase: ‘Protecting restless spirits to venture free’.”

In a nod to these restless spirits, the firm’s new advertising campaign borrows a phrase from ancient cartography: “Here be dragons”. Old map-makers certainly liked to embellish their work with illustrations of monsters, many of them from the sea. Belstaff is suggesting that when you pull on one of its jackets or pairs of boots you are ready to go meet the unknown. Now that truly is the adventurous spirit.

The essential grooming products for sailors