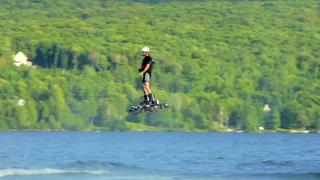 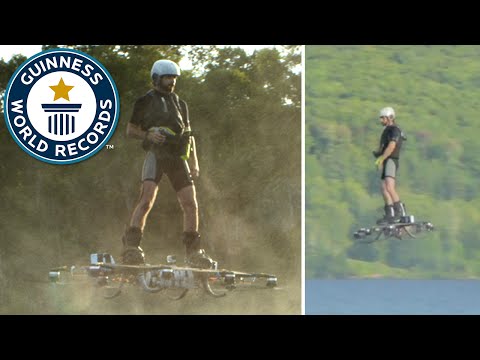 You’ve got the best jet skis, the wakeboards, the superyacht submarines, the slides and the water skis, so what’s next in the world of high-thrill water toys? Well, thanks to Canadian inventor Catalin Alexandru Duru, this summer everyone is going to talking about hoverboards.

Duru, who designed and built what he calls the world’s first real-life hoverboard, flew 5 metres above the surface of Lake Ouareau in Quebec for 275.9 metres – smashing the previous world record of just 50 metres. “I wanted to showcase that stable flight can be achieved on a machine one can stand on and control with their feet,” explained Duru of his decision to travel five times further than necessary to set a new record, stopping only when the board’s batteries ran out.

The hoverboard took around 12 months to design and build and, much like a drone, levitates using a series of propellers to lift the board and rider. Other hoverboard designs have used maglev-train style magnetic repulsion to float a few centimetres above the floor but given the stability and speed of Duru’s design, it seems this could be the way forward.

Better yet, Duru’s hoverboard works over any type of ground, not just water or non-ferrous metals, although testing is usually done over lakes for safety reasons. Unfortunately, as Duru’s prototype is the only one in existence, it may be a while before we see hoverboards become commercially available, but when they do we guarantee every superyacht owner is going to want one.

Video: Can you do this on your jet ski?