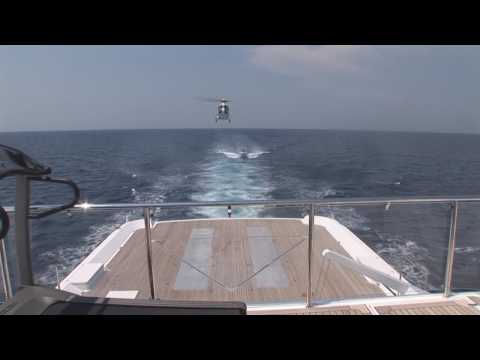 Watch: This is how you land a helicopter on your yacht

For most people the average grocery run is a mundane chore made out of necessity – unless of course you happen to be helicopter pilot on one of the world’s largest superyachts.

If you’re floating 60 miles off the coast of Croatia, as the yacht in the video below is, then you’re left with little choice but to take the chopper out to pick up some milk and bread. Of course, having the opportunity to watch skilled pilot Jay Schmidlapp’s perfect landing is just an added bonus.

As the video captures, Schmidlapp swings the helicopter around the luxury yacht before precisely lining it up with the aft helideck for landing. Flying steadily over a following tender, he brings the helicopter down lightly on two landing strips before executing a neat sideways shift to ensure the chopper is perfectly centred.

One thing that has surprised many people about the video is that the yacht is moving as the helicopter comes in to land. However, as Schmidlapp explains there are two good reasons for this, “Firstly, when the yacht is underway with the stabilizers extended it decreases the pitch and roll creating a more stable platform. Secondly, the forward speed of the ship which is headed into the wind gives added lift to the helicopter requiring less power to maintain lift.”

The helicopter flown by Schmidlapp is an EC135 - commonly though of as one of the top helicopters for superyachts. While the identity of the private yacht remains unknown, the video does let viewers see that it has one of the best superyacht gyms on its top deck.