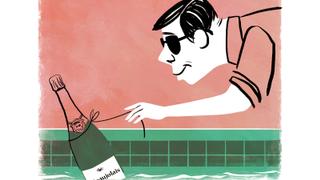 Why it's time to stop shying away from refrigerated red wine

Ready yourself for cool refreshment with some refrigerated reds perfect for balmy days on deck, says a chilled out Jonathan Ray...

There I was beside a Provençal pool. It was roasting hot and we clung feebly to the shade, gasping like stranded fish. We’d all had a glass of ice-cold Champagne which had perked us up somewhat and it was now time to pick at a light lunch.

It was simple fare – pork rillettes, salami, cheese, French bread – and while some of us tucked cheerily into the rosé, others craved something with a bit more oomph. But we also wanted something cold. Our canny host was one step ahead of us and tugged at a string in the pool and pulled from the water a perfectly chilled magnum of beaujolais (a 2015 Henry Fessy Moulin-à-Vent since you ask). It was fabulous, with plenty of ripe cherry flavours and a long, succulent finish. And it was wonderfully – almost thirst-quenchingly – refreshing too. Henry Fessy’s wines are famously drinkable, but this slid down even more easily than normal.

Chilled red wine is an all too seldom explored joy and perfect for lazy afternoons on the deck of your superyacht. I always keep some red wines in the fridge during summer and was thrilled at my host’s foresight.

Beaujolais loves being chilled, but so, too, do red burgundy and New World pinot noir; even bigger wines can cope. You don’t want them ice cold, just cool. And fret not: it will always warm up in the glass if you over-chill it. It’s far harder to deal with a red

Room temperature is the general rule of thumb when serving reds, but that old saw was coined long before central heating was invented and room temperature was then pretty cold. I was once served a Penfolds shiraz that I swear gave off steam as it was opened, so warm was it. I sent it back and asked for the next bottle to be brought in an ice bucket. This was perfect and I loved the way it developed in the glass.

More reds are ruined by being served too warm than too cold. Be bold. Just make sure there’s room in the fridge for the whites too.

5 of the best wine stoppers

How to buy the best wine for your superyacht parties