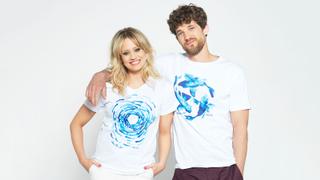 UK-based charity the Environmental Justice Foundation (EJF) has teamed up with world-renowned designers and celebrities to launch a range of new designs in its Just-For T-shirt campaign aimed at raising awareness around the biggest threats to the world's oceans.

Having previously worked with the likes of Vivienne Westwood, Katharine Hamnett, Naomi Campbell and David Gandy, for 2017 the EJF has teamed up with The Rodnik Band, John Rocha and Eley Kishimoto to create T-shirt designs celebrating the beauty of life beneath the waves. Each T-shirt is sustainably sourced and made from 100% Fairtrade organic cotton resulting in a carbon footprint just 10% of that of conventional cotton T-shirts found on the high street.

The T-shirts are accompanied by a promotional campaign featuring dancer Kimberley Wyatt and model Max Rogers, both of whom are EJF Ocean Ambassadors. All proceeds from the sale of the Just-For T-shirts goes directly to EJF’s conservation projects, in particular its campaign against illegal fishing and marine environment protection, and to date to project has raised over £500,000.

“With so much synthetic fabric making its way into our oceans as pollution, and a growing concern about the impact this has on environmental and human health, organic, fairly-traded cotton offers a natural alternative.,” said Steve Trent, EJF’s executive director. “By buying a Just-For T-shirt, you’re not only supporting innovation and sustainability in the fashion industry, but with 100% of the profits going back into EJF’s work, you’re playing a vital role in protecting the oceans and the people that depend on them.”

“Our oceans are the absolute basis of our ecosystems,” added EJF ocean ambassador Kimberley Wyatt. “Without healthy oceans we don’t have a healthy planet to live on… The amount of plastics, the amount of illegal fishing and whaling, all of these things really need to be addressed. And the time is now.”

The EJF’s Just-For campaign is just one of many projects working towards healthier, more sustainable oceans. If you know of an ocean-saving project worthy of recognition nominate it for the Boat International Media Ocean Awards here.