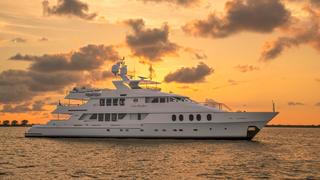 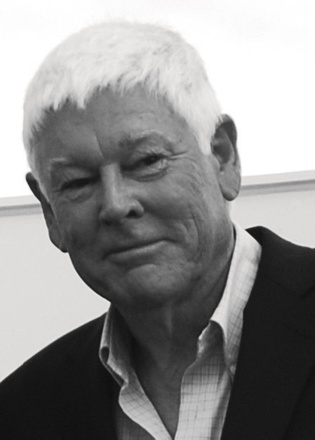 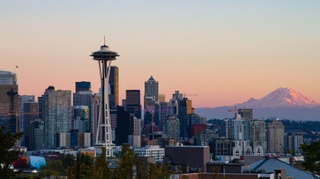 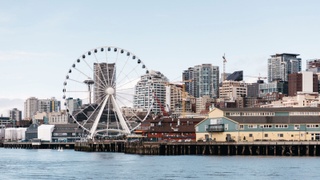 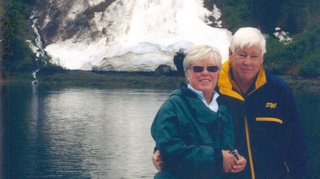 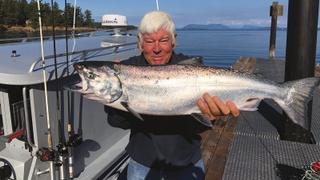 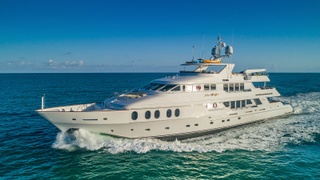 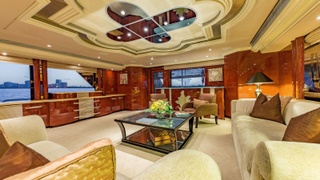 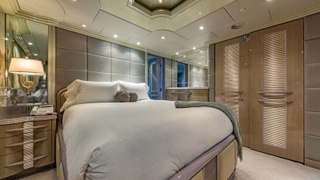 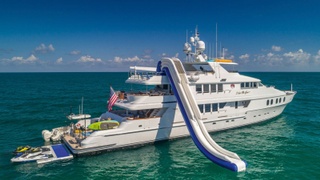 American Businessman Hal Griffith talks to Cecile Gauert about why he loves his 44-metre Christensen yacht.

“It’s such a great name because it just says exactly the way you feel. You know, I Love This Boat,” says Hal Griffith, speaking about his 44.2- metre Christensen. A raconteur and affable host, Griffith is generous with his time as he delves into his family business and his extensive experience with boats. We’ve settled into wide chairs on his terrace that overlooks the water, rock music from a yacht (not his) docked next door ricocheting off the water.

Griffith is most often described as a developer, but he has been involved in a variety of business ventures in his lifetime. “You win some, you lose some and at the end of it, you hope to come out ahead,” he says. It looks as if he’s been able to come out ahead. He splits his life between homes on the East and West Coasts of the US and enjoys boating on both sides of the continent. One of his investments is within eyesight of his newly finished waterfront terrace in South Florida. He points to a row of boats across the water, all neatly docked in the slips he’s acquired. But it is several thousand kilometres away that he may have made his biggest mark. In 2012, Seattle magazine voted him one of the city’s most influential people.

What earned him that distinction was the opening of one of the area’s most popular attractions. We’re not talking about the Space Needle, but a 53-metre Ferris wheel with air-conditioned gondolas that allows visitors to get a bird’s-eye view of the city, Elliott Bay and the Olympic Mountains on a clear day. It’s not quite the London Eye, but it is one of the biggest Ferris wheels in the American West. He tried for 30 years to get it built and had all but given up when one of his three sons lit a spark under the whole idea again. “Kyle was a real inspiration. He did a lot of the legwork and we were finally able to pull that together and get it open.”

They reformulated the idea, measured up the space they needed and finally got approval to build the wheel at the very end of a pier that the family owns. Pier 57 is a fun family place with souvenir shops, eateries and a tourist attraction, known as Miners Landing. “It’s a festival mall so to speak and we have everything on it from retail gift shops, a merry-go-round and the wheel. There’s also fine dining, moderate dining, fast food and a bakery; we bake our own breads and make our own ice cream,” Griffith says.

Seattle has no shortage of attractive neighbourhoods, but its waterfront needed some attention a few years back and the wheel helped kick-start a change. “It’s helped revitalise the waterfront,” he says. At the time, Seattle was in the midst of a major infrastructure project that cut off the city from its shore and Griffith believed this eye-catching attraction could help draw people back.

His life is very much tied to that particular area, which is where he began his career in the mid-1960s. He was born in California but moved to Seattle with his family when he was very young. He began work early – “I struggled through high school,” he says. His first job was in sales for a chemical company, but he had an entrepreneurial streak and started an advertising agency.

Then, from a mentor who took a liking to the inquisitive young man, Griffith learned he could make money selling salvaged cargo and opened a store named Salvage Mart (Mart standing for marine, air, rail and truck). Very early on, he figured out that “in order to be successful you need to diversify”. Griffith began supplementing the cargo salvage with other merchandise and the store became known as Pirates Plunder.

The wives of local halibut fishermen and the way they prepared and cooked fish gave him another idea. “They put this big steel box on the sidewalk, filled it with sand and built an alder fire in it with a grate on top. They laid the halibut on top in foil and smoked it over alder,” he recalls. “And I thought, ‘That’s a great idea.’”

Pretty soon he was in the restaurant business as well. Additional concepts were inspired by his boating experiences in the Pacific Northwest, where he regularly met up with friends. They would set traps or lines and share crab, mussels, clams, oysters, salmon or whatever bounty they’d have collected. At the end of the day, they often had a “big pot of clams going and a big pile of shrimp going”, he says, “all very rustic and very fun”. A couple of the restaurants on Pier 57 recreate that experience, minus the fishing. “That’s the fun thing about doing what we do. You see something that is different and then you put your own imagination to that. I’ve always felt you didn’t have to go buy a franchise or something that’s all laid up for you. Creating for yourself is just as easy,” he says.

What he was trying to build in Seattle caught the attention of others further down the Pacific coast. He was invited to San Francisco to look at a pier there. “Pier 39 at that time was nothing but a great big empty shed. They offered that to me if I wanted to do it.” He was too busy with his Seattle project and a bit strapped for cash. “I was having trouble rubbing two nickels to get there, so I never really could follow through and do it.” But he does not seem to have too many regrets about passing on the now famous landmark.

Born in 1937, he is at a stage of life where he travelling with his growing family. But he is still very much involved in the family business. “I try to keep the kids thinking, doing things that are adventurous and different,” he says. “That’s what keeps anybody going.”

A couple of current projects include a chain of Italian restaurants called Enzo’s opening in California – seafood doesn’t really work in the desert, he points out – and a marina for transient yachts near Dent Island in British Columbia, one of his favourite cruising grounds. The marina has a clever energy-management system with generators and a solar inverter, which adjusts to power demand. “By doing that, we can save thousands of gallons of fuel.”

Growing up on the water, Griffith always played around in boats. One of the first vessels he remembers owning was a Willits sailing canoe, handmade in Tacoma, Washington, which he wishes he had kept as they are now regarded as valuable antiques.

When they married, Hal and his wife, Joan, took a nine-metre sailboat to the San Juan Islands, having never sailed or spent the night on the boat before. They continued sailing for a few years, but grew tired of being the last ones to arrive when they met up with friends who had powerboats. Eventually they switched to motor yachts (starting with a Pacific Northwest-made Tollycraft 44) and never looked back. Little by little, the boats got bigger. Many years on, there was a 23.7-metre Hargrave, named Crab Pot after one of their restaurants, and then they built a 30.7-metre Hargrave named Sea Venture.

The couple split up the tasks, with Hal doing the driving and mechanics and Joan cleaning and cooking. “I grew up in an area and a time when you needed to know how to do things,” he says. “I maintain that, unless you have a mechanical aptitude, you shouldn’t own a boat.”

When it became a bit harder for them to handle the lines and run up and down the decks, they started to warm to the idea of a bigger boat with a couple of crew. An offer he made on a 39.6-metre yacht he saw at the Fort Lauderdale Boat Show didn’t work out, but then the Christensen became available and they were interested.

He appreciates that the yacht is very special. One of the most expensive yachts Christensen has built (as Primadonna in 2002 and later Aghassi), she has a custom interior by the late Italian-American designer Paola Smith, an ex-model and singer who forged a brilliant career as an award-winning designer. It needed some work, and after Hal and Joan bought I Love This Boat more than two years ago, they invested time and effort in restoring the mechanics, upgrading all electronics and refreshing the interior, which includes lovely hand-carved furniture handles made of crystal. Griffith only discovered that after he sought to replace a broken one. They had in mind to offer the yacht for charter when they are not using it. “We put on all the toys, all the stuff that people want,” he says. And charter, he says, “is the priority”.

They are, of course, enjoying the yacht themselves and adjusting to a different way of boating. “We have a very fine crew and like getting on the boat and not worrying about things,” says Griffith, who routinely lost nine kilograms during a summer of running his previous boats. “It’s really hard work, and the crew deserves a lot of credit. We just had four couples on the boat in the BVIs. We spent a week on board, and they thought they were in heaven.”

Lippy from the Liffey: Eddie Jordan cruises the East Coast

6 of the best places in the world to fish