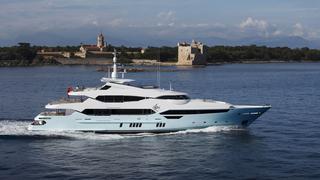 For Eddie Jordan, competing against the world’s best sailors and sailing yachts in the St Barths Bucket is hard enough – without a 30-tonne whale trying to scupper his chances too.

A whale almost landed on top of our boat during the St Barths Bucket. There we were, going along really well with the spinnaker up, when all of a sudden there was this unbelievable clatter. I just thought, “What the hell has happened now?”

It was as if the boat had gone aground, which is actually a big risk in those waters. Within a minute we heard the sound again – and all turned to see a whale breaching out of the water. And it just kept coming at us. It jumped a third time, then a fourth and a fifth; I mean, the thing was on top of us, no further than 12 metres away and I’m thinking, “Jesus, if this thing lands on us, we’re all brown bread (dead)”.

It was momentarily scary but also exciting. The thing is, our spinnaker is yellow, the Jordan racing colour, and of all things has a big picture of a pink whale on it. This was a 30-tonne whale, I think – a hell of a beast.

There were about 25 boats around us at the time and it was the talk of the dock when we got back. Everyone was so excited, and it was a happy moment after a great day of sailing. We were fifth in our class overall and honestly never thought we’d be in that league. But I had some guys with me who I knew I could rely on. You know, hardcore, competitive people who know what you have to drag out of yourself. I probably have that too, after 40 years in motor racing.

Talking about cars, I’ve seen stories linking me to the presenter’s job on TV programme Top Gear after the departure of Jeremy Clarkson. Love him or hate him, and I’ve known him for 20 years, he’s the face of that programme. He’s a lunatic, of course, and will be incredibly hard to replace, a complete one-off. I’m a friend of all those Top Gear guys; I’ve done a number of live shows with them and really enjoyed it, but the idea of me hosting that show is pretty fanciful. I’m very happy doing the Formula One with the BBC and I’m concentrating on that. Whoever takes over that show has some big shoes to fill and will get a hard ride from the press.

As I write this, I’m sitting in the departure lounge about to get on a plane to Bahrain for the Grand Prix. The beginning and end of the F1 season are the hardest. You start with events in Australia, Bahrain, Malaysia and China. These four are really hard on the body but even harder on the race teams. And then at the end of the season you’ve got Japan, Singapore, the US, Brazil, Mexico and Abu Dhabi.

At my age, I’m expected to do that and not feel jet-lagged. It’s hard to find time to get on my boats, but I try to get to Blush two days here or three days there. I’m always happy to fly to the boat to get on it, since it’s so relaxing when I get there.

I’ve become very friendly with the people of Bahrain over the years. The association started years ago in a bar in London. I was playing there with my band and the owner of the restaurant tells me the guy at the bar is the crown prince of Bahrain and wanted to talk to me.

I said, “Sure, yeah,” not believing him, but I went over all the same. He told me he had a strange request: could I loan him one of our Jordan race cars and take it to the desert for a photograph? I thought the guy was crackers, but we talked again and I agreed. Then the next week, in Autosport magazine, I see a picture of one of my cars in the desert with a caption that read something like, “In two years’ time, this car will be racing here.” And you know what? It was: that was the start of the Bahrain Grand Prix.

_Eddie Jordan’s fee for this column has been donated to charity. _