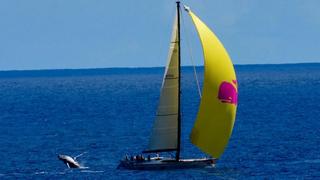 For Eddie Jordan, Top Gear is “the biggest TV show on the planet”. So, not surprisingly, he’s pretty chuffed to be one of its new presenters, alongside his new friend Matt LeBlanc.

I’ve just thrown my sailing season into chaos. Unless you’ve been living on the moon you’ve probably heard that I’m one of the new presenters on Top Gear. I think it’s fair to say the announcement of the presenting line-up was met with a mixed reaction! People understandably love the old Top Gear, and Jeremy Clarkson, James May and Richard Hammond have left some seriously big shoes to fill, but this is going to be a different type of show and I think people will be pleasantly surprised.

Seven years helping to present the BBC’s Formula 1 coverage has certainly helped me develop a thick skin – or else the ego could take a bit of a pounding. But on a serious note, I’m overjoyed. It’s the biggest TV show on the planet. I was speaking with co-presenter Matt LeBlanc – and obviously Friends was a huge sensation – but even he said he was awed by the scale of the show. Hundreds of millions of people watch it, and when you look at the territories it goes out in, it’s staggering.

My daughter is in New York at the fashion show as I write this, and she keeps telling me the addition of Matt to the Top Gear line-up is generating big headlines over there. He’s made a huge difference, and added some Hollywood glamour to the show. He’s actually the coolest guy on earth and the most sensible one among us. Chris Evans is off the charts – he’s always doing about 50 things at once. I’m not quite that eccentric – I can only manage about six or seven. Matt, on the other hand, is the most gathered human being and incredibly balanced.

Sabine Schmitz is a great addition to the team as well. I’ve worked with her in the past and she’s quite an operator, trust me. She was driving when Chris had trouble keeping his dinner down, which made a few headlines. But the story that hasn’t been told is that there was also a fighter pilot from the Top Gun academy there as well, and even he was green round the gills after a few laps with Sabine at the wheel. For her to do that to a fighter pilot is seriously impressive.

When I was being interviewed for the role, they asked me what boat licences I had, so they’re probably already lining up all sorts of boats for me to drive, which is a worry! There was all that speculation over Christmas about the future of Top Gear and a lot of mud-slinging, with people talking it down. They shouldn’t have done that. Chris Evans is just far too successful. Everything he touches just seems to work. He will be part of a Top Gear that will make amazing programmes. I believe that 100 per cent; it will be a breath of fresh air. I probably should be apprehensive, but I’m not. I’m convinced that this presenting team will be able to handle most things thrown at us.

The show is already taking over my life. I had to pull out of the St Barths Bucket, which is really disappointing. I managed to keep my entry to the Oyster Regatta in Antigua, though.

Some more news is that I’ve also agreed to be part of the Formula 1 presenting team for Channel 4 in the UK. I’m not sure how I managed to make that work. So I’ll do a shoot with Top Gear, then fly to Bahrain for the race. I’ll fly out at 2am the night the event ends, land at London Heathrow, get over to Gatwick and board a flight to Antigua for the regatta. I might be a little grumpy when I land.