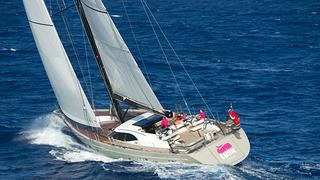 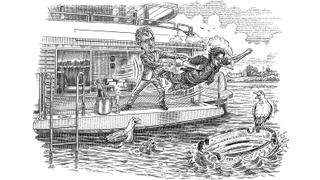 Lippy from the Liffey: Eddie Jordan on the perils of charter guests

From a brush with death to run-ins with charter guests, Eddie Jordan is thankful to have got off lightly...

I almost died in January. You might have seen it on the news. I was filming for Top Gear in Monaco, navigating in the Monte Carlo Rally in a brand new Alpine 110 with my fellow presenter Chris Harris at the wheel. The car was ridiculously quick and we were really throwing it around this rally course. I was in the passenger seat calling out the corners – “Easy right 40” and “Hard left 20”; things like that. Chris was doing a great job but the tone of the car changed when we exited this hairpin turn, like we’d hit something. Then suddenly Chris is shouting at me, “We’ve lost electrics, we’ve lost electrics!” and the next thing I know there are flames coming up my legs.

The fire was inside the car and we had to get out. If my belt hadn’t opened properly I’d have been toast! We got out and ran, expecting a massive explosion but it didn’t come. The car just burned down to almost nothing. I’ve never been in a full fire before, in all my years of motor racing. I’ve broken both my legs and been in a few crashes, but that was one experience that I’m very keen never to repeat, thank you very much. It was a shame actually – the car was amazing.

I was really sad to hear the news about Oyster Yachts. I don’t know enough about what went on to comment too much on it, only to say it’s a great British brand and that I’m sure a buyer will be found. It’s the Bentley of British sailing. I didn’t even do a proper sea trial with my Oyster Lush. I took her out of the yard and went straight to Tenerife for the ARC. Fourteen months later after a circumnavigation I had no complaints at all, so it caused me significant pain to hear about the brilliant workers being made redundant. I'm pleased to see it's been bought out of administration now - I hope it has a bright future ahead.

I’d better get on topic: chartering. First off, you have to be careful who you’re chartering to. I remember one guy who just wouldn’t stop smoking, no matter how many times he was told, and then it turned out to be weed. The captain told me he repeatedly warned this guy that he’d be kicked off the boat if he was caught one more time, and, of course, he was caught. He and the captain got into a bit of a row, fisticuffs and all. My captain was a former French submariner, hard as nails. Needless to say, the guest got off the boat.

I also remember one time having to hire a second chef because a bunch of girls had chartered the boat. One chef did a normal dinner at 8pm but some of the group didn’t get out of bed until 11pm and they’d want dinner at 1am – and that was before they went to the clubs! Then some crew had to be up and fresh to welcome them back at 6am or whatever. You just pray they don’t make a mess of the boat.

But compared to some stories I’ve heard I’ve got off very lightly. In the 12 or 14 years I’ve chartered my boats I’ve probably only had one incident a year. The lesson, I suppose, is if you’re chartering to someone you don’t know, for heaven’s sake get some references. It’s one of the reasons why trusted, repeat business is so important – and the key, for me, to luring people back year after year is your crew. I’ve had some great crew over the years and we’ve had very low turnover. The guests would always ask, “Are Sean and Matt still on board?” or “Is Patrick still skipper?” It’s so, so important. And a busy boat means big tips for the crew, so it’s a win-win. And you may even manage to offset a few fuel bills.