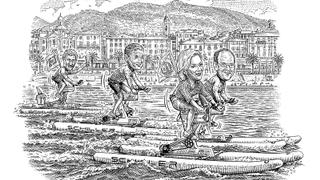 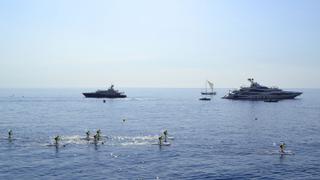 Lippy from the Liffey: Eddie Jordan takes on the Riviera Water Bike Challenge

Eddie Jordan enjoys some much-needed R&R on his yacht after his charity work takes an unexpected (and alcohol-fuelled) turn...

This summer I had such a crazy weekend in Monaco that I had to take a few days out on Lush to recuperate. I was the MC for the Riviera Water Bike Challenge, which was set up by Princess Charlene to support her charity that helps kids mainly in undeveloped countries learn water safety. It’s all about teaching them to enjoy the water, but also to respect it.

The event was a true who’s who and five teams took part – there was Steve Cram, Paula Radcliffe, Mark Webber, David Coulthard, Mika Hakkinen, Felipe Massa, Frédéric Michalak, Stefan Terblanche and many more. I’ve been to some great events, but I’ve never seen so many famous Olympians and sporting legends in one place. They came from all corners to support the Princess.

This is the second year of the event. Last year they raced these water bikes – basically an exercise bike between two pontoons plus a little prop – from Nice to Monaco, but it was a little hard for spectators to watch and the competitors had some big swell to deal with.

This year they did it round a course from the yacht club to just outside the harbour and the turnout was immense, with thousands watching on a great family day out. These bikes are fun but they’re bloody hard work. Mark Webber said to me, “Eddie, I’ve won the Monaco F1 twice, but I’ve never felt pain like I’ve just felt in the last 15 minutes going around this course.” Princess Charlene did five laps, and you could tell she had trained hard for it, as you’d expect from a former Olympian. It wasn’t a surprise that her team won. Prince Albert took part, too, and surprised everyone when he suddenly dived into the water after a lap to cool off. Everyone was saying, “Hang on, where’s the Prince gone?”

It was all for a great cause and the parties were amazing. At a barbecue the night before, Coulthard put me into a press-up contest with the South African rugby star and World Cup winner Percy Montgomery, one of the greatest kickers of all time. I’m 70 and he’s 44, and the challenge was who was the first to 70 push-ups. I can’t tell you how many beers I’d had by that stage, but I made it to 70 push-ups. I think I was out of my skull, but I was being egged on by Coulthard.

It’s great to see the palace getting involved in charitable events. The other big one, especially for Prince Albert, is conservation. I know Boat International had its Ocean Talks event this year, which is a great step forward. Ocean conservation and the catastrophe of plastics pollution is something the Prince has been preaching ever since I’ve known him. I take it super-seriously on my boats – nothing goes over the side, even in the middle of an ocean. Not a piece of paper, not anything. You leave
the boat with a big sack and dispose of rubbish properly. If I see anyone throwing something over the side, it’s instant dismissal. We’ve only got one planet.

Lippy from the Liffey: Eddie Jordan on the perils of charter guests

Lippy from the Liffey: Eddie Jordan on his favourite marinas and showing support for the Caribbean