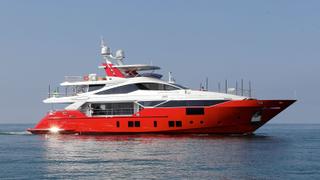 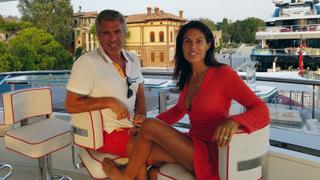 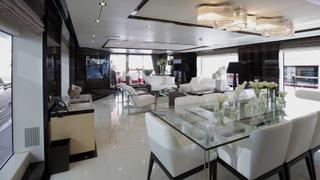 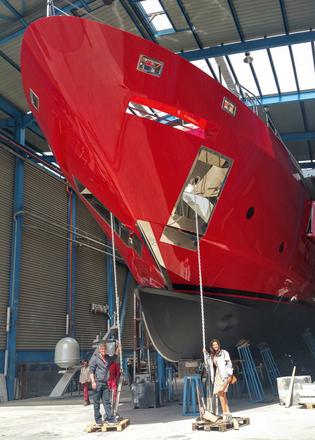 38 metre Benetti superyacht Constance Joy sure is a head-turner and, as Grace Trofa learns, owner Barry Skolnick wouldn’t have it any other way...

As kids, my father took us to look at boats, but we never had one. I didn’t buy my first boat until I was in my early 30s – it was a 10 metre Cougar with fuel injected 850s. Then I went to a 12.8 metre Outer Limits with twin 1,200hp motors. After freaking myself out doing 130mph, the boat burned down to the waterline. A friend saw flames shooting out of the engines and we jumped overboard. After that I was done with go-fast boats.

My first cruiser was an 24.4 metre Azimut but after three years I decided I wanted something bigger, don’t ask me why. I stayed in the family and bought my 38 metre Benetti. It is cutting-edge technology and does 24 knots with Rolls-Royce pods that were developed for the boat.

I was very hands on, starting with the colour. I am passionate about cars. I own several Ferraris and I wanted that Ferrari red; they thought I was crazy, but I went with my gut. You can’t be afraid to go outside the box.

The one thing I had to have were the two opposing balconies in the owner’s cabin, and I made a special request for screens that keep the bugs out. I wanted this boat to be inviting and sophisticated but not so much that you’d feel badly about putting your feet up on the table. Texture, scale and colour are important to me. For 30 years I’ve been doing buildings, including all my homes, and absolutely I am a frustrated architect.

When we picked up the boat in Viareggio, my girlfriend Missy and I spent 73 days cruising the Med, the Amalfi coast, Sicily to Greece, back up to Montenegro and Croatia. We spent 10 days just cruising through the islands then up to Venice, it was awesome. But I prefer to get off the beaten track and I love the Bahamas. The Exumas are my favourite place, the water is so crystal clear and still relatively unspoiled.

My plan is to keep the boat between the Bahamas and the Caribbean, bring it up to Newport, Sag Harbor, Martha’s Vineyard, and I am not shipping the boat back to the Med anytime soon. I always wanted to go up to Maine and Nova Scotia and just keep going. I would also love to cross the Atlantic by boat someday.

I am in discussion with Benetti for a 53.4 metre with a steel hull but that will be it, no bigger, and I don’t mind cruising at 12 knots now. All my boats have been named Constance Joy after my mother; her father gave her the name because he said she would always be a constant joy.

Today my businesses are diversified. I inherited a horse business from my father and won breeder of the year for the second year in a row – I wish my father had been alive to see that, but he did get to see me buy a boat.

My life in boats: Robert Burk, owner of Our Heritage