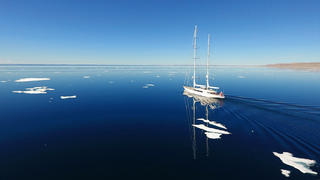 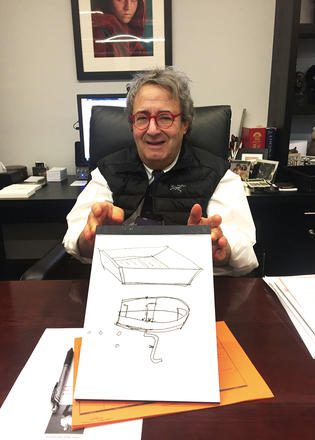 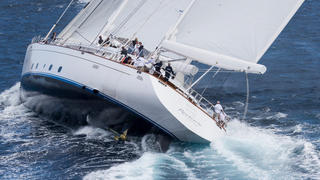 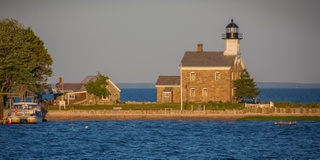 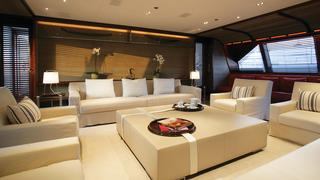 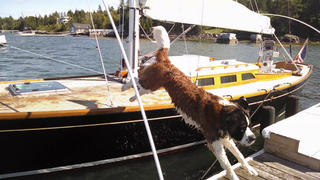 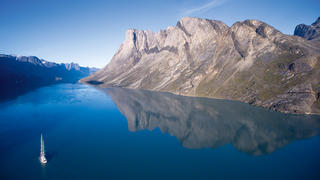 London-based American retail developer and superyacht owner Joey Kaempfer tells Stewart Campbell about his “perfect boat”, how he haggled with Rupert Murdoch to buy her and his ambition to take on the world’s wildest seas...

Joey Kaempfer has always been an ideas man, even if some of those ideas have nearly got him killed. The homemade plywood boat he took out into the middle of a lake near his home in Connecticut, aged just eight, wasn’t one of his best (“Lifejackets? What lifejackets?”). Nor was the floating hot dog stand – “the Floating Frank” – which he had to commit some mild insurance fraud to operate (at 15 he was too young to appear on the insurance document so he got an older boy to sign it). Thankfully things have improved since then and his latest plan – to sail his 56 metre yacht Rosehearty to some of the world’s finest and trickiest cruising destinations – is one of his best. So, it turns out, was establishing McArthurGlen 25 years ago. The company has become Europe’s largest developer and owner of designer outlet parks, with 22 locations and annual sales of more than €4 billion.

We meet at the company’s headquarters in London, a city the American has called home since the 1990s, and he wastes no time in getting out the pictures from Rosehearty’s recent trip through the Northwest Passage – making his boat one of the first large sailing superyachts to make it through.

The 69-year-old Kaempfer was keen to get up there before it became too busy. “I think in the next few years you’re going to see tankers going through there and 1,000ft container ships. It won’t be quite the same thing. And I always wanted to see Greenland.” To join him on the passage, he invited a group of close friends and hired a pair of guides and an ice pilot, bringing to 24 (including crew) the number of people who would spend a month navigating one of the world’s last superyachting frontiers.

The pictures, however, are missing one important thing: Kaempfer himself. The owner of the boat and organiser of the trip never made it through the Northwest Passage. After joining the yacht in Greenland, he received the tragic news that his beloved son Lucas had died suddenly of heart failure in New York. He was just 24. It’s clear father and son were close. Kaempfer even converted Rosehearty’s main deck office into a cabin for his son. “He loved it,” Kaempfer says. “It was up on deck. He got up early and went to bed late, like 24-year-olds do.” His voice cracks later as he tells the story of the watch he’s wearing, which he had made for Lucas and which bears his name in an inscription on the back. The watch rarely leaves his wrist.

Kaempfer doesn’t have to tell me any of this, but his candidness and generosity and the fact he insisted the trip through the Northwest Passage must continue in his absence are a huge part of his charm. For an adventure he didn’t take part in, he remains incredibly proud of it. Rosehearty’s captain, David “Hutch” Hutchison, blogged throughout the journey from Newport up to Greenland, and then into the passage proper in Canada. Rosehearty made it through the Bellot Strait in August 2016 before heading north and east around Somerset Island for the trip home, first back to Greenland and then, finally, the island of Vinalhaven off the coast of Maine, where Kaempfer has a home.

He grew up not a million miles from here, on Long Island Sound, Connecticut. His parents weren’t big sailors – “my father worked in New York and took the train in every day for 40 years until it killed him” – but he remembers always being drawn to the water, so much so he turned his hand at a very young age to boatbuilding. “The first boat was probably six feet long and the bottom would have been a piece of plywood and the sides would have been fibreboard. My friends and I painted it and then way too soon, when it was wet, we took it to the lake and poled our way out. Nobody was watching us and, of course, it instantly started disintegrating. Some mother in one of the houses saw us and started screaming. I was a strong swimmer and managed to get everyone to shore, but it was a complete disaster. At that point my parents gave in and bought me a rowboat,” he says.

He soon graduated to dinghy sailing and, at 15, bought a pontoon boat with the help of his parents to set up his summer business selling hot dogs. “I worked my ass off that summer. I had to hire an 18-year-old to get insurance through Lloyd’s of London, which ate the profits,” he recalls. “It didn’t make any money and I sold it at the end of the year and repaid my parents.”

His entrepreneurial streak was further honed at New York University and later at Harvard Business School, after which he entered the real estate business in Washington, DC. “I started out building houses. All those guys seemed like they were having a ball, but they weren’t. They were losing their hair and getting fat and divorced. So I decided I’d build office buildings and started my own company at 29. Our first building was 186,000 square feet. Boy did we learn a lot!”

In the 1980s Kaempfer was cruising to work in a cherry red Ferrari 288 GTO, riding a commercial real estate boom that made him one of the richest 40-year-olds in the US. But the recession of the early 1990s bit hard, forcing Kaempfer to start again almost from scratch. When the opportunity arose to move to Europe and introduce the American concept of out-of-town outlet malls, he jumped at the chance, settling in Little Venice in London with his then wife and two children, Lucas and Annie.

The only retail he’d been involved in to that point had been on the ground floor of his office buildings, so it represented a significant shift in focus. “We weren’t retailers. We were contractors and builders and office building managers, but the business has just grown gigantically. We have 600 employees here in London, plus 30,000 who work across our business elsewhere. Who knew? All this from a couple of little shopping centres,” he says. “This business is much more fun [than office building]. It’s alive, it’s dynamic and it’s entertaining – we’ve convinced 100 million people a year to travel half an hour to come and shop.”

As his businesses have grown, so have his boats. His first indulgence was a six metre sailing boat, which was quickly upgraded to an eight metre. “I kept it up in Maine and sailed it every day I was there, dragging my kids along, who were in sailing school,” Kaempfer recalls. A 17 metre Oyster came and went and, around 15 years ago, he bought the 21 metre Hinckley Sou’wester Avatar, renaming it Annalu after the children. “That was a beautiful boat,” he says fondly. The Hinckley was eventually sold and he chartered for a few years but maintained ownership with a gorgeous 11 metre Morris sailing yacht, which he still owns today and regularly sails single-handed along the Maine coast – “even at my advanced age!”

The opportunity to buy Rosehearty appeared at the 2013 Monaco Yacht Show. The elegant 56 metre Perini quickly became one of the most recognised boats on the water when it was launched in 2006, for that distinct white hull and the celebrity of her first owner, media tycoon Rupert Murdoch, who named the yacht after the small Scottish village that was home to his ancestors.

The deal was put together quickly after Kaempfer’s tour of the yacht in Monaco. “I knew I wanted a Perini,” he says. “As I was taken on board I thought it was very handsome and then I got in it and took one look at the Christian Liaigre-designed saloon and I thought ‘magnificent’. Rupert originally wanted an outrageous price but I finally got to a price where I thought I could spend a couple of extra million to have the boat I wanted.” The deal was done in just four months, with Kaempfer taking ownership in early 2014. “I ended up spending a lot more than two million. I mean a lot more! But I’ve got the perfect boat now.”

The refit was done at Perini but the boat was back at the yard in 2015 in preparation for the Northwest Passage – which meant replacing the flybridge cover with a new one that couldn’t be penetrated by ice falling off the rigging, fitting new super-strong lights for spotting icebergs and adding comprehensive night vision equipment.

On 3 July, Rosehearty left Vinalhaven for the passage to Greenland, where the party of guests joined the boat, Kaempfer included, at Nuuk, the capital. “It feels like the edge of the world,” he says. “Everyone is very nice, but not much English is spoken.” They cruised north, touring the epic fjords of this enormous Arctic island, visiting Kangerlussuaq, home of the glacier from which the infamous Titanic iceberg is thought to have calved, and Qassiarsuk, which was settled by Erik the Red at the turn of the last millennium.

Minus Kaempfer, the yacht then crossed Baffin Bay and entered Canada on 2 August, exiting just more than 20 days later after completing one of the greatest yachting adventures. It wasn’t without its perils, reports Hutch. At one point they were anchored in Creswell Bay on Somerset Island when the wind picked up. “We started seeing these little white specks, which suddenly became hundreds of ice blocks as the current increased. We had to get out of there quickly,” he says. A week after leaving Resolute, meanwhile, the sea became solid ice and utterly impassable. “So it’s still pretty weather dependent.” Keeping 24 people fed for a month in an area without any hope of provisioning meant the spa pool was pressed into use as food and drink storage. “We had a 5,000 litre cooler on deck,” the captain laughs, “cooled by ice hacked off icebergs.”

The owner of the yacht hasn’t given up on experiencing all this himself; Rosehearty will be heading back to the extreme north again. But before that, Kaempfer has had a few other ideas – good ones. Chile and Easter Island are on the list, as is a transpacific passage to Australia. “I want to do Antarctica and I want to do the Galápagos,” he adds, smiling. “I have an awful lot to do.”

On top of the world: Inside Latitude's epic Arctic adventure