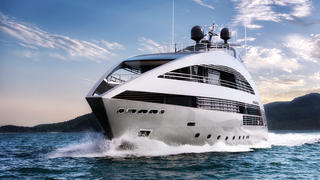 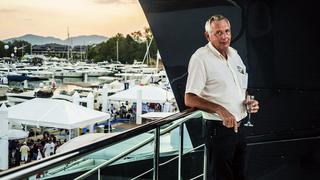 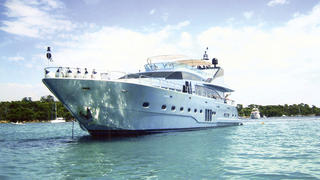 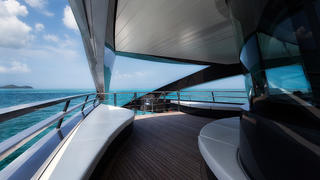 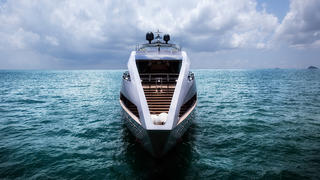 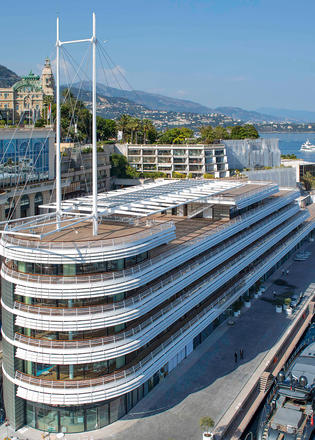 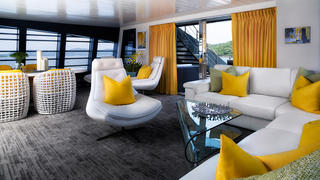 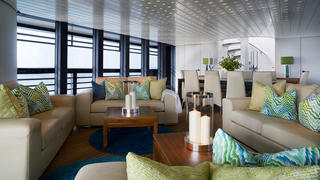 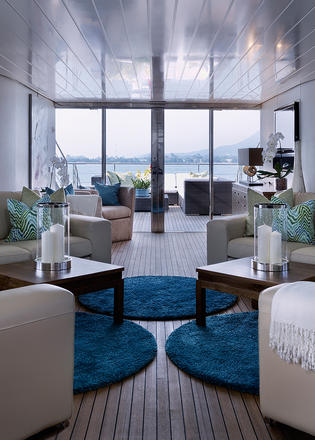 Nigel Plaskett, the owner of superyachtOcean Emerald, tells Dominique Afacan what drew him to a boat that “looked like a hospital” when it was launched – and how he transformed it to a home from home...

Ocean Emerald is not for everyone. Like yachting Marmite, people tend to love her or hate her; in fact, there are entire internet chat rooms devoted to deconstructing and debating her design. Lord Foster is the man either to thank or to ridicule, depending on your opinion. It was, after all, the world-famous British architect who conceived that grey aluminium superstructure, which sweeps up from the bow and then, as if showing off, never stops, dropping back down aft to create an arching silhouette that wouldn’t look out of place in a Bond movie (the boat actually featured in the remake of Point Break).

Alongside Foster’s other creations, the likes of London’s “Gherkin” tower and the Monaco Yacht Club, she fits right in, but out there on the water, Ocean Emerald stands quite apart. Such an attention-seeking boat might appeal to a superyacht owner with similar characteristics, one might imagine. With Nigel Plaskett at the helm, it’s more a case of opposites attract. This is a softly spoken, unassuming Englishman who just happens to love boats.

As a child growing up in Hampshire, the whole family would sail together, sowing the seeds of his lifelong passion. “It’s in my blood,” explains Plaskett, from his home in the Gulf of Thailand. “The first boat we had was a Senior 26 when I was just eight years old. Sailing wasn’t very popular in England at the time, but the Chichester Yacht Basin had just opened and somehow we all got involved. My brother Neil and I would go and help with work on the boat at weekends – cleaning, painting, sanding, whatever – and then we’d all jump on and go across to the Isle of Wight or around the Solent.” Plaskett’s ownership journey began soon after, when, aged just 15, he bought himself a small cabin cruiser on the Thames for £640. “I kept it for a year and then sold it at a profit,” he says. This early-won flair for business meant that joining his father’s new company, Trafalgar, aged just 16, was a natural next step. He joined the day after he left school.

Trafalgar, in its beginnings, was simply an import agent for engineering parts from Europe and Asia but soon Plaskett made the smart decision to change the business model and open manufacturing plants in the UK, where quality and service could differentiate it from the Asian companies that were undercutting Trafalgar. With Plaskett and brother Neil both on board, the company quickly prospered, growing to a 200-strong operation and turning over around £20 million a year. In 2001, Trafalgar was able to buy out its main competitor Spheric and eventually sold out as Spheric–Trafalgar to a Japanese company three years ago. “It’s nothing to do with us now at all,” says Plaskett, “we’re just enjoying ourselves!” At 58, the good life has come early.

Leisure time before the sale of the business was something of a luxury, and despite owning multiple yachts over the years, he was once more frugal in his purchases. A Sunseeker Superhawk here, a Bilgin 100 Jumbo there. Suddenly faced with freedom and fewer financial barriers, his buying motivations shifted. “Boating before could feel a bit like camping! I’d be rocking about at sea and I didn’t have proper sized bathrooms and things,” he says. “After we sold the business I wanted something more comfortable that I could go away on for long periods. That translated to about the 40 metre mark for me.”

Scanning the internet, he saw the familiar outline of the 41 metre Ocean Emerald, built by Rodriguez Yachts back in 2006. “The first time I had seen her was in Nice when I was purchasing my Bilgin 100,” Plaskett recalls. “The day I went to pick [the Bilgin] up, Ocean Emerald was doing a press day just after its launch. It wasn’t love at first sight, but I was definitely interested. I went up and had a good look around.”

Having dabbled in design and architecture himself, Plaskett gave the boat more time and consideration than most. “A lot of people see Ocean Emerald and immediately think she doesn’t translate to what a ‘normal’ superyacht should look like so they decide they don’t like her. Even I was guilty of that at first. But when you actually go on board and look around you realise that there is a tremendous amount of space for the size of the boat. The layout is good too – all the decks look on top of each other which is very sociable. At the same time, if you do want privacy, there are places you can escape to which are quiet.”

The boat was originally built as one of a series of four for YachtPlus, a co-ownership scheme that didn’t work out. Her multiple owners (including Lord Foster himself) were eventually taken over by one buyer, who later sold the boat to Plaskett. “I feel I got a reasonable deal,” he says, although he won’t reveal the price he paid. Today, he recoups some of the cost of ownership through charter, but the benefits for him go beyond the financial. “For me, charter is a hobby,” he explains. “I still have a property company in the UK but I employ someone else to run it for me so it doesn’t stimulate the brain. With charter, I end up doing a bit of management and a bit of sales. It’s good for me.”

While the boat is chartering in Thailand, which usually ends up being about six to 10 weeks a year, guests will find Plaskett on board too, with no exceptions. “The Thai mentality is to say yes to everything and not to offend by saying no. I am there to manage the crew in that respect, though I try to fade into the background for the sake of the clients,” he says. Most of his guests come from Russia and Europe with the odd day charter from China – and while 99 per cent of charters have been a resounding success, Plaskett will not tolerate bad behaviour when it comes to treatment of his crew. “If anyone treats them like dirt, I will throw them off, simple as that,” he says. That has happened once, but the juicy details are sadly off limits.

Plaskett, who lives in the Gulf of Thailand for 10 months a year, is well-qualified to recommend the best itineraries to his guests. “The nicest trip is usually to Ko Chang or Cambodia then across to Ko Samui, Ko Tao and Ko Pha Ngan, and finally back up to Bangkok. It’s a triangle that ticks a lot of boxes – there’s a good mix of authentic Thailand alongside more luxurious tourist spots within easy reach.” Ocean Emerald was actually the first superyacht to get a charter licence in Thailand, but the bureaucracy and barriers surrounding the process have meant that few other boats have followed. For Plaskett, there’s a long way to go to perfect charter laws in Thailand. “In their current state, most owners wouldn’t want to get involved. All the government departments are arguing with each other,” he says.

Tricky visa issues are navigated by employing local crew through his Thai company. “I find the crew here better than their Western counterparts to be honest,” he says. “In Europe there are so many regulations, whereas here the mentality is different. They just want to get the job done. In the Med, you only need to walk around a marina to see the number of crew sitting doing nothing. That never happens on Ocean Emerald.” The fact that crew are paid well above the national Thai standard must also make it easier to find and retain talent, and in fact, many of Ocean Emerald’s nine crew have been with Plaskett for years, moving with him as he progressed from boat to boat.

Beyond charter and crew complications, Plaskett felt that there were also design issues to iron out, a result, perhaps, of having an architect at the helm rather than a traditional yacht designer? “I like the fact that architects dabble in boat design,” he says. “My only feeling is that they should perhaps work alongside the specialists, too. Ocean Emerald was very much designed for looks over practicality. Things like storage space are missing and the top deck was literally an open space when I bought it. There was no nice bar or spa pool – architects are prone to forget those bits and sometimes prioritise concept over detail.”

Having built and designed a few of his own homes in the UK, Mallorca and Thailand, putting everything right was half of the appeal. “When the boat was first launched, it looked like a hospital,” he recalls. “Everything was white inside, it was very cold looking. I wanted to make it warmer and more homely.”

He worked with local companies in Thailand to design bespoke furniture and set about creating a total change in ambience. The four guest cabins downstairs are next on his list, with plans for a more flexible layout so that when fewer guests are on board, cabins can be extended. “Like many boats of this size you lose so much space with the garage and the toys at the back. Once you take the crew area out, you’re left with very little room for the other cabins. It’s a bit out of sync really – you’ve got a very luxurious master suite and then you cram in four bedrooms.”

For most of the year, though, it is just Plaskett and his friends and family on board and so lack of space is not an issue. His brother Neil often leaves his Sunseeker 96 behind in the UK and comes out to Thailand for some sunshine; even when the boat is parked up in Ocean Marina, Nigel is on board every day. “The temperature is so much more pleasant on the sea so I’ll often use her as my office,” he explains. “I wanted the boat to be a home from home.”

Speaking of homes, might Plaskett want to try his hand at building a boat from scratch, given that he’s already triumphed with his own properties? A firm negative. “The houses were enough!” he says. Perhaps venture into sail, then? Turns out, he’s already ticked that one off his bucket list. “I’ve actually got a sailing yacht, O’Lina, a 27 metre, but I’ve given it to my son to look after. I much prefer Ocean Emerald.”

The yachting community might still be in two minds about this unusual boat, but she has, happily, found her biggest fan in Nigel Plaskett.