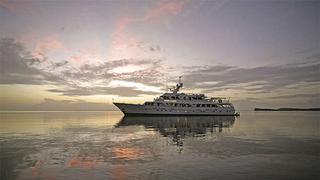 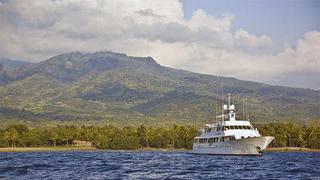 The owners of 46 metre world-roaming motor yacht Golden Compass, Ed and Kristy, developed a deep enjoyment and appreciation for the sea at a young age, growing up in their respective childhood homes of Seattle, Washington, and Southern California.

When they met and began to grow a family of their own, it was only natural that boating remained an important part of their lives, providing unforgettable memories as they explored Washington's San Juan islands aboard Ed's fathers 10.5 metre Tolly Craft. "We had a wonderful time exploring various ports, salmon fishing, putting out the shrimp and the crab pots, hiking, biking and enjoying the wonderful scenery and wildlife," Kristy says.

Next, they acquired a 15 metre Chris Craft to continue their exploration of the Pacific Northwest. The increasing enjoyment boating brought to the family experience inspired a dream in Ed and Kristy to travel the world with the kids in tow.

"We equipped the decks with netting to prevent mishaps with the children and continued exploring further up the West Coast to Alaska," Ed says. "We really wanted to travel around the world with our kids for a year before they reached high school."

But there would be years of family raising and hard-charging career moves to come before they pulled that dream out and dusted it off. Their first round-the-world adventure came in 2001/02 as a 15-month journey, which included home schooling their two children, but was not done aboard a yacht. Even travelling in first class, the demands of the lengthy trip - hauling two children and luggage from country to country via air, rail and road and the inconsistent quality of meals and accommodations - proved to be challenging.

The highlight of that first trip was a week aboard a charter yacht in the Greek Islands. "That week was absolutely magical," says Kristy. "We had never experienced that level of service, comfort and excitement, it was unforgettable. We started to imagine what it would be like to travel around the world on our own yacht for an extended period of time. Wouldn't it be perfect if we could travel to India, China and Southeast Asia without the difficulty caused by interruption of normal diet, exercise and sleep routines?"

After completing the 15-month trip, they attended the Fort Lauderdale and Monaco boat shows. Drawing on their extensive travel experiences and the hundreds of yachts they toured during these shows, they also developed the image of their dream yacht.

"As owners with little experience in superyacht cruising, we struggled to identify the most important attributes of a yacht to best meet our needs as well as those of our charter guests," says Kristy.

"Suddenly, the economy changed dramatically, and the cost of yachts plummeted," says Ed. "Yachts we could not consider previously were now a reality." The right vessel at the right time turned out to be a 46 metre Picchiotto, an Arthur DeFever design built in 1982.

The full-displacement, steel hull vessel had an ample beam that provided a spacious, stable platform while her relatively shallow draught allowed for visiting many anchorages otherwise inaccessible. Meanwhile, her fuel-efficient engines, generators, desalination equipment, HVAC and redundant systems were chosen for their relative simplicity to maintain. The accommodations, with an owner's suite and four guest suites, provided the required space for friends, and also serve well for charter.

The deal was made at the end of 2008, with the refit taking place in Fort Lauderdale. The owners jumped into the project full time, moving aboard the yacht and acting as general contractors. From the end of December 2008 through mid-August 2009, Golden Compass was a dream in progress.

Planning a circumnavigation with Golden Compass

Planning the start date of the Golden Compass world tour turned out to be a moving target from day one. As the work on the refit was winding down the plan for the world cruise was heating up.

"We had many preconceived ideas about where and when we would go and how long we would stay in various destinations," Kristy says. "We are intrepid travellers, but this style of yachting was new to us and we were trying to incorporate personal preferences and advice from more seasoned superyacht owners.

"If measured by the length of dinner conversations and questions received from others, there is no doubt that destinations such as the Amazon, remote Indonesian islands, East Timor and Papua New Guinea would provide a far more exciting itinerary than the Caribbean, Mediterranean and South Pacific. The realisation that we would find such satisfaction in these remote areas was a big surprise for us and for the few guests who dared venture with us."

Ed notes that travelling by yacht came with some surprises beyond the happy kind of discovering the beauty of remote destinations: "We initially anticipated leaving Fort Lauderdale in August 2009, but soon learned that itineraries have to be constantly adjusted according to weather patterns, immigration requirements, bunkering requirements, moorage or anchorage availability, provisioning needs and associated costs."

As they journeyed along, they dealt with the many challenges, including exchanging thousands of emails to yacht agents and government officials to coordinate trips up the Amazon, to East Timor and the Sepic River in Papua New Guinea, and they arranged special security in many destinations, including Columbia, Cuba, Port Said, Gulf of Aden, Sri Lanka and Jakarta.

By October 2009, the Golden Compass voyage was finally under way. Steaming south from Fort Lauderdale, the first leg included visits to the Dominican Republic, Bonaire, Columbia, Jamaica, Cayman Islands, Mexico, Cuba and Key West. They found themselves on a journey that would expand their horizons and challenge their thinking.

"Cuba brought up so many conflicting views," reflects Kristy. "The youth struggling to move the country forward and make more progress; girls dressed to the nines on a Friday night in spite of the rampant poverty; pristine natural park areas with few if any local tourists; a once-thriving Havana trying to hang on to its roots, fighting deterioration, as they slowly renovate, caught in a 1950s time warp."

Over the following year, Golden Compass explored The Bahamas and Caribbean and made it all the way down to the Amazon. "The Amazon River was remote and beautiful in the few areas that are still untouched," Ed says. "Very few luxury yachts travel here, so the reception and interest we received from the locals was amazing. The kids paddled in their dugout canoes to greet us.

"Word of our arrival spread up river by word of mouth and radio. Hundreds of kids in their canoes were ready for us as we passed their villages. Watching the natives adapting their lifestyle as the rainforests diminish is very disheartening."

Golden Compass continued on, crossing the Atlantic to the Canary Islands, on to Gibraltar then calling on ports throughout the Mediterranean. By the fall of 2010, she had working her way around the boot of Italy into the Adriatic to the coast of Croatia, south to Montenegro and then to the Greek isles, Crete, Turkey, Cyprus and on to Israel and Port Said.

She transited the Suez Canal, stopping in the Egyptian port of Sharm el Sheikh before continuing down the Red Sea through the Gulf of Aden and ending the year in Dubai.

Early 2011 found Golden Compass on the move again, heading south in the Indian Ocean on her way to the Maldives and some of the best diving on the planet. Continuing east, she called on ports in Sri Lanka, India and the Andaman Islands before transiting the Bay of Bengal to Myanmar, Thailand and Malaysia.

"Travelling aboard Golden Compass gave us the safety and security we needed to be confident to explore remote areas," Ed explains. "Not limited to areas within comfortable driving distance from a resort, we could simply cruise and anchor anywhere that looked interesting."

Cruising by yacht to remote areas provided the added benefit of allowing guests to concentrate on the here-and-now, to become comfortably immersed in the texture and flavour of the surrounding culture  not to be distracted by the challenges of conventional travel.

Through the spring and summer of 2011, Golden Compass continued to explore Thailand, Malaysia, Singapore, East Timor, and Indonesia, arriving in Papua New Guinea and the Banda Sea Islands in autumn

Yet travelling by luxury yacht also allowed guests to keep up with their lives back home if need be, providing easy communication with the real world, thus enabling them to prolong their time on the road.

As Kristy explains, "The yacht had become the epicentre to work from and took on many roles during the voyage. These ranged from being the sole source of entertainment, to the other extreme of a place to meet and eat while exploring ashore. Enjoying a home office, worldwide communications, entertainment choices - fishing, golfing, biking, kayaking, jet skiing - added to the total experience."

Through the spring and summer of 2011, Golden Compass continued to explore Thailand, Malaysia, Singapore, Indonesia, East Timor, and Indonesia, arriving in Papua New Guinea and the Banda Sea Islands in autumn. A week-long cruise up the Sepic River with guests aboard produced indelible memories of the extreme diversity of cultures.

The year 2012 began with a maintenance period in a Bangkok shipyard before turning back to sail through the Indian Ocean, the Red Sea and the Suez Canal, then on to Italy and the Genoa Charter Show. _Golden Compass _spent the spring and summer with charters in France, Italy, Greece and Croatia.

During the time Golden Compass went to work chartering and during long passages, her owners still kept up their gallivanting, chipping away at their bucket list. Highlights included observing mountain gorillas in their Ugandan natural habitat and climbing Mount Kilimanjaro.

When Golden Compass completed her journey, she had logged more than 30,000 nautical miles, calling at more than 100 ports in 45 countries. Her owners visited more than 100 World Heritage sites, rented 200 cars, played golf in 20 countries, and made dozens of charitable donations of cash, medical and school supplies, and gifts of food, clothing and toys to village children in developing nations across the globe.

This all contributed to Golden Compasss owners earning the Voyagers Award during the 2012 World Superyacht Awards held in Istanbul, Turkey.

"Looking back at our journey, we realised it was our passion that drove us to this final result," Ed says. "We may not have recognised it at the time, and we never expected any recognition for it. We've taken the position that we would share what we learned on these travels so others could benefit."

"In retrospect, much of the pleasure and memories derived from the trip were a result of the amazing people and their willingness to share their experiences and perspectives with us," Kristy says. "Our interaction with the men, women and especially children in these remote areas has given us an understanding and appreciation for how different their lives are and the enormity of the challenges they face.

"Our journey has been so rewarding that we hope this recognition will encourage more yacht owners and charter guests to explore lesser-known destinations."