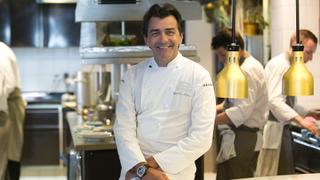 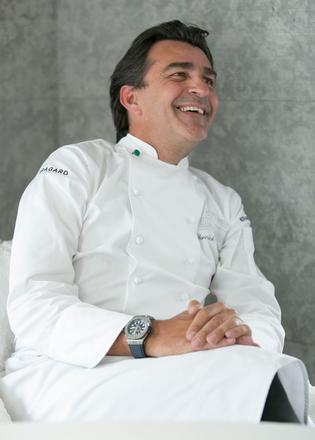 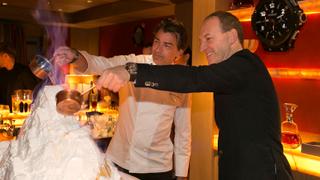 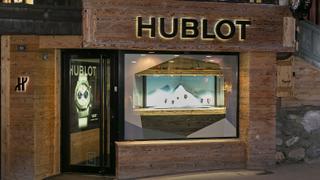 Reclining on a sofa, chef whites rolled casually to the elbow and exuding easy charisma, Yannick Alléno couldn’t seem further from the stereotype of a fiery fine dining chef. Underneath this charming exterior, however, lies the ambition and steely determination of a chef at the top of his game.

Owner of six Michelin stars and roundly regarded as one of the world’s best chefs, Alléno is on a mission to revolutionise the world of fine food with his Modern French cuisine movement – guaranteed to be coming to a superyacht galley near you soon. Distinct from the fuss and pretention of nouvelle cuisine, Alléno‘s Modern French cuisine is the product of years of research and experimentation and holds the chef’s patented saucing method of extraction and fermentation at its core.

“Sauces are the pillar of all food,” explains Alléno. “An ice cream is a sauce you put in the freezer and the cream you put in a choux pastry is a sauce. So if you want to change food, sauces are where you need to start.” The fruition of the movement came in 2017 when Le 1947, Alléno’s tiny 22-cover restaurant at the Cheval Blanc Courchevel hotel and birthplace of the technique, was awarded a third Michelin star.

“I’d worked in kitchens since I was 15 and when I came to Courchevel I knew I needed to stop and take a breath,” says Alléno. “Cooking is so competitive and you don’t have time to stop and experiment. I went to see Mr Arnault [CEO of LVMH, owner of the Cheval Blanc group] and told him about my dream and he said, ‘Do it here’. I told him there wasn’t space so they pulled down a wall to build the restaurant.

“Before opening I took a year to really work on my vision for a new way of making food. For a creator it’s fantastic to have the opportunity to make these things happen and the team is very dedicated, they constantly push the frontiers of cooking.” The proof of the pudding for any restaurant, however, lies with the diners – Le 1947 is currently fully booked until 2020.

However, it is not in the restaurant but the equally chic neighbouring Hublot boutique that we are meeting. The fine Swiss watch brand had just announced Alléno as its new ambassador as part of an on-going partnership with Cheval Blanc Courchevel and the ski resort at large. The latest in the brand's series of high-profile Art of Fusion collaborations – which have so far featured figures including Usain Bolt, Floyd Mayweather, Depeche Mode and the Chelsea football team – the partnership would be celebrated later that day with a Fire & Ice-themed party culminating in Alléno flambéing a two foot tall sorbet Alpine mountain of his own creation.

As with any good ambassador, Alléno was a customer and fan of Hublot long before the partnership was proposed. “I’ve been wearing Hublot watches for five years now,” he says. “I have Rolex Daytonas and Jaquet Droz timepieces in my collection but really I only ever wear my black Hublot Big Bang – although I have my eye on something brighter for summer.”

“I love the brand’s vision,” he continues. “It’s not static, it is very creative and that’s how I like to live - as a chef it’s very important to keep changing things and creating new specialities.” Alléno sees a clear synergy between his work in the kitchen and the work of a watchmaker. It was Hublot’s use of carbon fibre that inspired him to design and manufacture trays to replace the heavy silver ones used by his waiters and, as he sums up, “in both cooking and watchmaking, the details are where real success lies.”

While booking a table at Le 1947 may not be on the cards any time soon, with international eateries, including locations in Dubai, Hong Kong, Paris and Shanghai, owners wishing for a first taste of Modern French cuisine may have better luck in more yacht-friendly locations. And, as for Alléno’s advice for your on board chef? “Be passionate and work hard. That’s the only way to make it.”