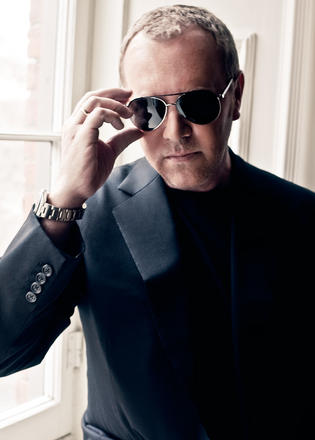 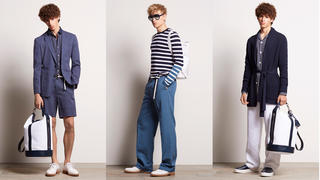 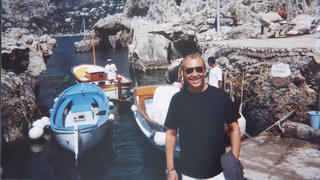 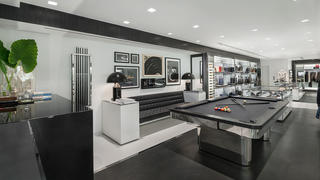 Considered by many to be the quintessential American designer, Michael Kors’s clothes have long been synonymous with jet-set luxury, with few Kors ads lacking a yacht, private jet, or helicopter. Now, thanks to an IPO in December 2011, Kors inhabits this world himself, circling the globe with a year-round tan and ubiquitous aviators. Indeed, his latest menswear collection is heavily inspired by his love of travel.

Today, his men’s and women’s wear ranges – as well as jewellery, accessories, watches, footwear and fragrances – are sold in hundreds of stores around the world (there were 774 as of June 2015). Ten seasons as a judge on the hit reality TV show Project Runway made him internationally famous. Angelina, Gwyneth and Michelle are all fans. But, 36 years after he founded his company, the core aesthetics of Michael Kors’s design philosophy remain the same: laid-back luxury and a distinctly American sense of glamour.

Charming and chatty, Kors has long been known for personal appearances, and meeting customers was a crucial element in his early success. He says that the customer, male or female, remains his ultimate barometer. Men and women present many of the same challenges in terms of design, he says, but above all “it’s about knowing, listening and understanding what your customers want. In the end, it always comes down to empathy and the ability to put yourself in their shoes.”

Nowadays, menswear is on fire. A new floor devoted solely to it in Kors’s London flagship store on Regent Street – complete with pool table – testifies to the trend. Men are far more concerned about how they look and what their clothes and accessories say about them than they used to be. “Fewer men are wearing suits on a daily basis,” Kors says, “so they need clothes that are laid-back but still polished and tailored.” Being a man helps, he says, so the impetus for his designs is personal. “Clearly, I can’t wear it all, and I shouldn’t wear it all, but I have to want to wear it all.”

Kors’s spring/summer 2017 collection has a nautical theme, with programme notes citing “maritime blues from the Atlantic to the Mediterranean”. Men are advised that if they wear only one bold colour this season, “make it blue”. For the show, Kors asked for the models to look windswept and natural, “like they were just off a yacht after a day of sailing and about to go out to dinner in Monaco”.

This was thanks, in no small part, to his love of the sea. When not designing, Kors loves to travel as it provides “endless inspiration”. One of his favourite places is Capri, where he likes to rent a boat and “just spend the whole day making our way around the island, stopping to soak up the sun, swim, eat vongole and drink sangria. It’s divine.”

Kors says that the clothes this season are about “being ready to go from work to the weekend”. He’s convinced men now realise that “the best solution to getting dressed for a busy life is to wear clothes and accessories that can work in a million situations”. This new collection, he says, “is for a guy who is on the go, someone who goes to the office and then jumps on a plane, or a boat, or a train”.

In keeping with the collection’s work-to-weekend concept, the blazer has become an outerwear layer, using unconventional fabrics to achieve maximum versatility for the garment. A windbreaker-like fabric called paper poplin was chosen because it is “very lightweight, but still gives you a little bit of cover when it’s chilly. It’s a blazer but it has the rustle of a windbreaker because of the material, and it can work both ways.”

Employing the term “hybrid”, he explains how he intends to take the most important elements of a man’s wardrobe and to merge them: “Whether it’s a tailored trouser that suddenly becomes a denim trouser, a trench coat that becomes a pullover, or a windbreaker a blazer, it’s really for the guy who wants to have it all; to have the best of both worlds.”

Unusually for menswear, bold patterns and polka dots – with a nod to David Hockney – are infused throughout the collection. When the weather gets warm, there’s something about graphic geometry that “lends an added sense of polish to a man’s look”, Kors insists. But for the ultimate onboard polish, Kors has only one piece of advice: “Never leave home without your aviators.” He never does.

Full tilt: Georgie Ainslie on the America's Cup and living life in the fast lane

A safari in silver: Inside the Patrick Mavros jewellery empire