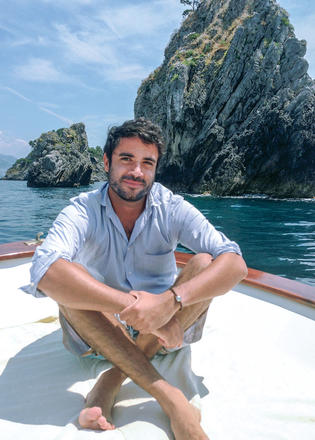 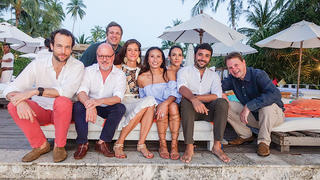 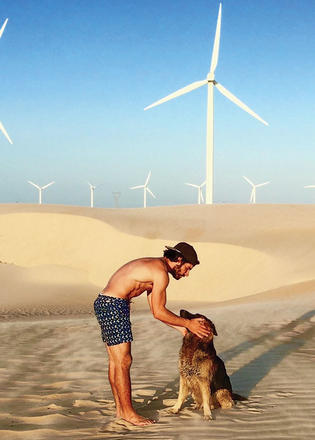 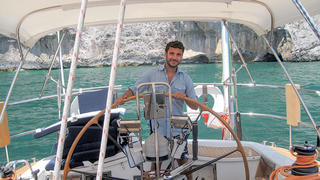 Life's a beach: In conversation with George Sotelo, founder of Thorsun

A rising star in men’s designer swimwear, George Sotelo shares the secret to his success with Harriet Mays Powell.

Born in Los Angeles to Mexican parents, George Sotelo spent much of his early life on a beach. Whether surfing in Southern California or travelling with his family to Puerto Vallarta or Acapulco, he was always happiest, he tells me, when within sight of the water. This background could be why Thorsun, the brand Sotelo founded and designs, is such a success. In less than two years, and on the eve of delivering his third collection, the line is poised to become the next big thing in resortwear.

Yet Sotelo didn’t set out in this direction. His first career was in the music business, and he moved to New York to work at Arista Records. When Arista disappeared in 2011, he took a job at Robert Burke Associates, a fashion-consulting firm. “I was a music guy who was always into fashion but never really wanted to work in fashion,” he says.

His position gave him a clear view of the business side, especially the mistakes of other designers. “I learned that you have to really love your product and to be extremely focused on your message,” Sotelo says. “You can’t be everything to everybody, which is easy to do because you want to be successful.” Creating a product that he would want to buy himself now lies at the core of his design philosophy.

A frequent visitor to Rio de Janeiro, Sotelo needed shorts that could take him through the day in style, something that was tailored, but still sporty, versatile and practical. “In Rio,” he explains, “when you leave your house in the morning, you don’t bring a bag to the beach. You just carry your stuff on you — phone, keys, money — and you definitely don’t bring a towel, as it’s considered seriously uncool!” Not finding suitable swimwear, he decided to create his own.

With things falling out of pockets being a recurring problem, he began by designing deep pockets that tilt forward. And not wanting the shorts to scream “practical” but to look cool and sexy — “as this is Rio!” — he rejected external cargo pockets, opting instead for a hidden internal security pocket, plus back zip pockets. The shorts needed to be able to “hold a lot, yet still look super-streamlined.” The ultimate objective was a seamless progression from the beach to the bar.

Having resolved issues of fit and functionality, Sotelo turned his attention to aesthetics. Mexican vacations had left him with an enduring love of traditional ceramics, especially those made by the Mata Ortiz pueblo, located less than 100 miles from the U.S. border, in the state of Chihuahua. Essentially, they are a revival of ancient Mesoamerican pottery, and Sotelo liked the fact that although centuries old, the designs seemed curiously modern. They would translate well into prints, he reckoned, and had an additional advantage of showing “another side to Mexico — not the obvious piñatas or references to Frida Kahlo.”

Sotelo’s business began to take off. Then, as sometimes happens with successful companies, he received an accidental stroke of good fortune. The Webster clothing store in Miami asked for an advance delivery of his first swimwear collection, to arrive in time for Art Basel. But the manufacturer had made a mistake with the sizing, and the smaller trunks were more suitable for women than for men. “A lot of women started buying my shorts,” he says. W Magazine listed them as a Top 10 Editors’ Pick, and Vogue promptly ran a story on “the cutest thing on the beach.” A deluge of emails began to arrive from women saying that they loved the prints and wanted fast-drying shorts to wear while paddleboarding, or ones that left them more covered up while lounging.

Getting the validation he needed from both retailers and editors, Sotelo took the plunge. It was clearly a business with potential. “I can wear the same shorts for a week, but some of my female friends change their bikinis three times a day.” Womenswear now accounts for 40 percent of Thorsun’s business. Sotelo still finds it “funny to be sitting here and discussing my women’s swimwear. If you had asked me three years ago, I would have said, ‘Absolutely no way, never!’ I was intimidated by womenswear.”

At about the same time, Barney’s suggested he develop other lines. Sotelo’s current ambition is to become a swim brand, and he has plans to add towels and other swim merchandise to complement his signature shorts. Ultimately, he wants to be the resort equivalent of hip designer brands like Thomas Maier and Dries Van Noten. His products will continue to be playful, luxurious and aspirational, he says, but they will never become too expensive, ranging from $250 to $350.

Recently, Sotelo has added “fun and beachy” prints to shirts. And next season will see Egyptian- and Indian-inspired prints, as well as lightweight knits that “would be right for Californian winters.” Concurrently, he is working to make his website a travel destination site, with live-stream video from famous beaches around the world. “I want it to be a fun lifestyle destination for all beaches and beach-related things,” he tells me.

After taking his “road show” to the UK, Sotelo plans to head to Miami and the Bahamas. For him, their beaches represent an enviable combination of work and play.

The best men's swim shorts for the Caribbean season