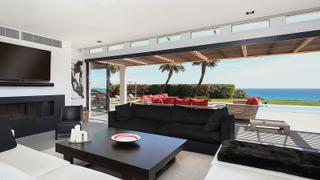 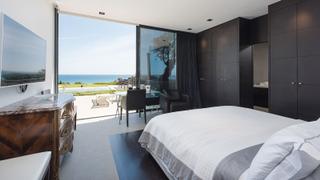 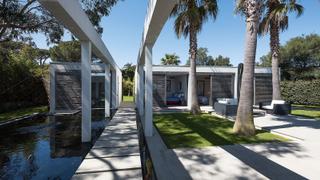 Villa with a view: A contemporary St Tropez villa in the heart of the action

Discover a Saint-Tropez villa with a sprawling terrace and a seamless blend of indoor and outdoor spaces that's just a short stroll (or stiletto-clad totter) from Club 55...

Perched above the silky sands of Saint-Tropez’s Pampelonne beach, this modern villa is the perfect sanctuary from which to dip into the local razzmatazz. At the heart of Villa Zebrano are a terrace and pool, with views across the sparkling sea below. Glass doors open on to the terrace from a spacious combined living and dining room.

The main villa has two large master bedrooms which allow light to flow in through floor-to-ceiling windows. A stone walkway leads to a further four standalone guest rooms: with a modern feel, all four have indoor bathrooms and outdoor showers. “My favourite feature of the property is the panoramic sea views from every single room,” says Beauchamp Estates’ sales agent Mirka Mikleticova.

The property has a small independent suite for staff or a gardener to help maintain the landscaped terraces. There is also a fitted kitchen and a television room.

All the amenities of Saint-Tropez are just a short drive away and the villa is within walking distance of Pampelonne beach, a hangout for celebrities and sun-seekers since the 1950s. This stretch is also home to Saint-Tropez’s first beach club – Club 55. Once a favourite stop-off for Brigitte Bardot, it hasn’t lost its touch, with superyachts lining up along the beach waiting for their VIPs to be picked up by the club’s tender.

This jet-set crowd has kept property prices high in the Côte d’Azur and France’s political stability looks set to further boost its real estate credentials. “The Macron effect is having a good impact and there are more active buyers already this year than the previous year,” adds Mikleticova.

Villa Zebrano is for sale with Beauchamp Estates at €22 million, beauchamp.com.

Villa with a view: A luxurious St Lucia retreat with hotel amenities

Villa with a view: A beachfront Grenadines hideaway primed for relaxation

Villa with a view: A super-stylish Phuket stay