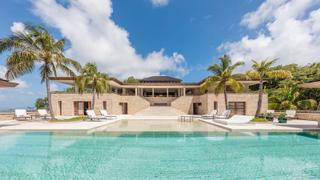 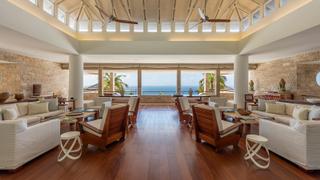 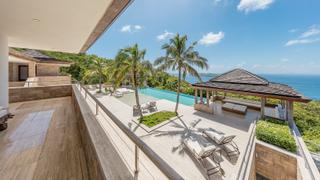 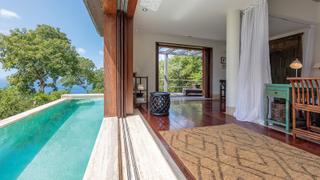 Villa with a view: A Mustique retreat with complete privacy

Sophia Wilson discovers a Mustique getaway with swathes of tropical gardens in a paparazzi-free zone for those seeking to shun the limelight...

Perched high on the southern side of Mustique, this modern villa is the result of a collaboration between American designer David Kleinberg and Italian architect Paolo Piva.

Hummingbird’s design is centred around an 18 metre infinity pool and central terrace, which emphasise the panoramic views across the Caribbean Sea. Six of the property’s seven bedrooms are located in the main residence, including a master bedroom with a private rock pool. The seventh bedroom is in a separate guest cottage with its own lap pool.

More than three hectares of lush gardens guarantee complete privacy. The property’s south-facing hilltop position also affords it some of the best sunset views on the island, a feature that agent Neal Sroka of Douglas Elliman thinks is its finest asset.

Mustique was a relatively unremarkable dot in the Grenadines chain until it was purchased by eccentric aristocrat the third Lord Glenconner for just £45,000 in 1958. He rid it of mosquitoes and gifted a plot of land to Princess Margaret. The island soon gained a reputation with the 1960s jet set for its decadent lifestyle and naked beach parties.

The vibe has matured considerably since then but its visitors are still a who’s who of the world’s elite. The Duke and Duchess of Cambridge have been on holiday there this summer, and Mick Jagger and Tommy Hilfiger own sprawling properties. Buying Hummingbird includes becoming a shareholder of the Mustique Company, which owns and runs the island.

The A-list nature of the community means the island is able to command some of the highest prices in the Caribbean. “Mustique is still one of the world’s most desirable locations because of its limited access, exclusivity, and the sense of island life,” says Sroka. Given that the asking price for Hummingbird is more than 450 times the price Lord Glenconner originally paid for the entire island, its appeal seems stronger than ever.

Hummingbird, Mustique, is for sale with Douglas Elliman for $28 million.

Villa with a view: An Antibes penthouse with superyacht style

Capital Gains: The London Properties to Invest in Now

Are you being served? Why hotel-style service is the new frontier for ultra-prime property