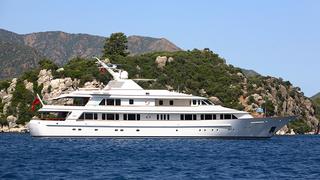 The 52 metre motor yacht Rasselas, listed for sale by Dirk Johnson at Perini Navi USA, has been sold with the buyer introduced by Michael Mahan at Worth Avenue Yachts.

Built in steel and aluminium by Dutch yard Feadship to a design by De Voogt, she was delivered in 1994 as a Lloyd's classed yacht and has been constantly upgraded since. An interior by John Munford bears all the hallmarks of his inimitable classic style and sleeps up to 12 guests in five cabins. These consist of a main-deck master suite with a king sized bed, two doubles with queen sized beds and two twins, each with a Pullman berth, and all cabins have flatscreen televisions, Crestron control pads and en-suite bathroom facilities.

The main saloon is large but cosy and has a formal dining area while outside there is al fresco dining on the spacious aft deck and on the sun deck with its spa pool. Twin Caterpillar 1,280hp engines give her a range of 5,000 nautical miles and she is fitted with Quantum zero speed stabilisers.

In 2010 her main engines and generators were rebuilt while in 2014 she had a full hull repaint. In autumn 2015 her entire hull was sandblasted and she received a new primer along with three coats of paint. At the same time various cosmetic upgrades were carried out to give her a complete facelift.

Rasselas was offered for sale with a complete complement of water toys, including no fewer than three tenders, snorkelling gear and scuba diving equipment including a Bauer dive compressor.