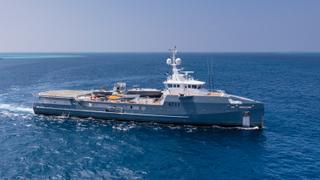 The 67.15 metre Damen Sea Axe superyacht support vessel 6711, listed for sale by Imperial, has been sold with Rob Dolling of Verpeka Dolling introducing the buyer.

Delivered early in 2014, the build of 6711 was managed in cooperation with Imperial, acting as broker, owner's representative and construction project manager, continuing a long-term collaboration between Imperial and Amels. “6711 has been a very interesting project, a special type of support vessel with a highly customized and very practical layout whereas the building process at Damen runs like clockwork,” said Evgeniy Kochman CEO of Imperial.

The Sea Axe yacht has a grey hull and white superstructure and has been faired and painted to superyacht standards. She accommodates up to 21 staff and crew members. 6711 boasts 275 square metres of deck space, excluding her fully certified helipad, and she has a 74 square metre garage and workshop. She has been fully specified with a focus on diving and features an extensive 74 square metre dive centre, which include a decompression chamber.

The Damen 6711 Support Vessel was asking €28,500,000 and the buyer also bought her onboard Triton submarine.