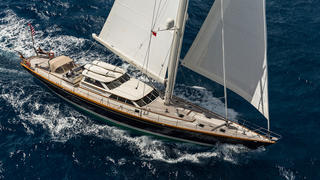 The 33 metre sailing yacht Marae, listed for sale byBurgess, has been sold with the buyer introduced by Thomas Cleator at Denison Yachting.

Built in aluminium by New Zealand yard Alloy Yachts to a design by Ted Fontaine, Marae was delivered in 2004 with refits in 2009 and 2014. Her flowing exterior lines are complemented by a classic interior in cream shades and rich walnut panelling throughout, accommodating up to eight guests in a master suite, VIP suite and a twin cabin plus two Pullman berths.

All cabins come with entertainment centres, LCD television screens and en-suite shower facilities. In addition, there are quarters for four crew in two cabins.

The deck arrangement has a private aft cockpit with a companionway leading to the owner’s cabin, while forward are two helm stations situated port and starboard. Entering the pilot house, there is a large sofa to port and an inside helm to starboard.

The main saloon is split level with a bar immediately to port and sitting area to starboard. Down several steps there is a dining table to starboard with a guest head forward and a large sitting area with settees, chairs, tables and an entertainment centre including a 37-inch Sharp television screen and a Bose Lifestyle surround sound system. Twin 300hp Lugger diesel engines give her a range of 4,000 nautical miles.