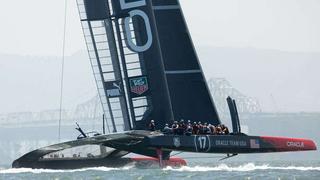 Murray headed a review committee, which was formed after the capsize of Swedish team Artemis Racing's AC72 led to the death of teammate Andrew Simpson on May 9. Since its first meeting on May 16, the committee interviewed 25 team members – from skippers and designers to engineers and support boat operators.

The recommendations include the use of buoyancy aids, body armour, crew locator devices, hands-free breathing apparatus and high-visibility helmets. Recommended changes to race management include flexible start times based on wind and tidal flow, soft marks to replace mark boats and wind limit adjustments based on tide and sea state. The Regatta Director Recommendations have been incorporated into the America's Cup safety plan and forwarded to the U.S. Coast Guard. Murray will now form task forces to source experts that will define specific technical recommendations for safety gear for the sailors.

Three America's Cups teams have returned to training on San Francisco Bay, less than 10 hours after the expiration of the no-sailing recommendation. Oracle Team USA and Luna Rossa returned to their training programs, and for Emirates Team New Zealand, it marked its first sail on the Bay since the team's arrival in San Francisco at the beginning of May.