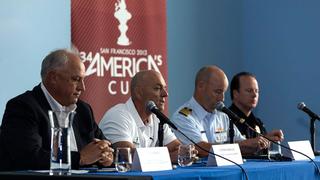 America's Cup organisers held a press conference to confirm that this summer's event remains on track. Experts in sailing and safety at sea have been named to a committee, which will review the training and racing of the AC72 yachts in the 2013 America's Cup.

The review committee was formed after the tragic loss of Artemis Racing crew member Andrew 'Bart' Simpson on May 9, when the Swedish team's AC72 catamaran capsized in San Francisco Bay.

Iain Murray, America's Cup Regatta director and CEO of America's Cup Race Management, will chair and lead the review committee. He is joined by: Deputy Chair Sally Lindsay Honey, a two-time winner of U.S. Sailings Yachtswoman of the Year; John Craig, the Principal Race Officer for the 34th Cup and a board member for U.S. Sailing; Charles Hawley, who has sailed more than 40,000 miles and is chairman of U.S. Sailings Safety-at-Sea Committee; Vincent Lauriot-Prévost, co-founder of the multihull design firm Van Peteghem Lauriot Prévost (VPLP); and James Farmer, a lawyer and competitive sailor for 15 years. The U.S. Coast Guard supports the process and will assist the review, with Lt. Jon Lane, who has 10 years experience as a marine casualty investigator, acting as liaison.

As Louis Vuitton Cup racing starts in seven weeks, the review committee will set to work as soon as possible to ensure any necessary recommendations can be made ahead of time.

'The America's Cup will go ahead this summer,' says Tom Ehman, vice commodore of the Golden Gate Yacht Club (the America's Cup Trustee). 'We will see the world's best sailors racing at the highest level on one of the most iconic race tracks in the sport.'