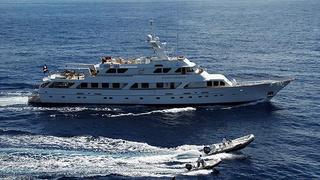 News just in from Noell Vawter at Worth Avenue Yachts of a $250,000 price drop on Picchiotti’s 46m motor yacht Golden Compass, a joint listing with Ocean Independence.

Golden Compass was the winner of the Voyager’s Award at the 2012 World Superyacht Awards following an amazing 30,000 nautical mile world tour. Built in 1982, she’s been consistently maintained and upgraded since, including major refits in 2009 and 2011.

Accommodation is for up to 12 guests in six staterooms and twin 900hp Caterpillar engines give her a range of 3,800 nautical miles.

Lying in Fort Lauderdale, Golden Compass is down from $6.9 million to $6.65 million.