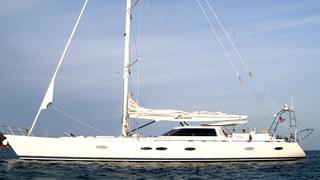 Ardell of Newport Beach California has confirmed the sale of the 28.04 metre performance sailing superyacht Locura, for which Tom Corkett of Ardell was the listing broker and Dana Davidson of Davidson Yachts, Rhode Island, brought the buyer.

Locura, a fractional rigged sloop, was conceived as a performance bluewater pilothouse yacht when it was built by Salthouse Brothers in Auckland, New Zealand in 1994 and has sailing pedigree. Her designers incorporated their experience with larger racing yachts, including those that have raced in the America’s Cup. She is capable of long distance voyaging to all points of the compass and is suitable for extended living aboard.

In 2003, Locura returned to Salthouse Brothers for an extensive refit that included new hatches, new teak decking in the cockpit, aft deck and swim platform. A new rudder was designed, built and installed in 2012, greatly enhancing base of steering and performance. In all, nearly $1,000,000 has been spent on upgrades of Locura.

Locura’s accommodation sleeps six, plus one crew. The owner’s stateroom enjoys a full-width forward and is private from the rest of the yacht. Aft of the engine room there are two guest cabins. To port is a double berth and an additional removable Pullman berth. To starboard there is a second guest cabin with two individual berths plus two Pullman berths that are also removable. The crew quarters are located all the way aft, and there is emergency access to the crew quarters through the guest bathroom's shower.

In calm seas, the aluminium-hulled Locura will sail between 10 to 12 knots. Off-the-wind, the vessel will sail 13.5 knots in about 25 knots of wind. Reaching, the yacht will be making 12 knots with 20 knots of breeze. She has a single 300hp 2007 inboard diesel 6068 SFM 50 turbo charged John Deere engine that has a cruising speed of 9 knots and top speed of 12 knots.

Locura was in Newport Beach, California at the time of the sale, and her asking price was $1,095,000.