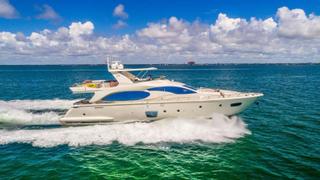 The 25.9 metre motor yacht Persistence, listed for sale by Peter Quintal and Juno Prudhomm at Denison Yachting, has been sold with the buyer introduced by Ariel Taubas at Allied Marine.

Built in GRP by Italian yard Azimut, Persistence was delivered in 2009 and refitted several times since, most recently in 2017. Comfortable accommodation is offered for eight guests in four cabins consisting of a master suite with a king sized bed, a VIP suite with a queen sized bed and two twins, and all cabins have entertainment centres, LCD television screens and full en suite bathroom facilities. A further two cabins sleep up to three crewmembers.

The large main saloon has a high gloss wood interior, a teak and holly sole, large windows, curved sofas to port and starboard, a liquor locker, an entertainment centre including a 42-inch Samsung television screen and a Bose stereo surround sound system. Forward is the formal dining area with a large oval teak table surrounded by eight upholstered matching chairs.

Outdoor space is available on the large sheltered main deck aft, which has a built-in GRP settee with new cushions, a teak table and built-in stereo speakers overhead. A staircase leads up to the flybridge, where al fresco entertaining and dining is offered at a built-in sofa, sun pads, loungers, a bar, gas barbecue, sink, fridge and a Jacuzzi tub, all sheltered by a retractable hard top.