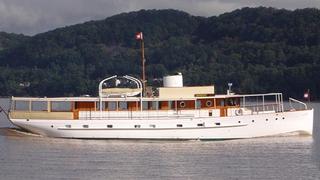 A while ago Joe Bartram at Bartram & Brakenhoff promised to send me full details of the venerable 28m motor yacht Innisfail as soon as she came on the market and, true to his word, here they are.

Built by Trumpy in 1939, she has three double staterooms and has played host to numerous US presidents and foreign dignitaries. Her owner has spared no expense in bringing her back to her original origins. The modern stack was replaced with a stack similar to the original. The false “modern” fly bridge was removed and traditional cap railing was installed.

The entire old fibreglass covering of the boat deck was removed, all damaged wood and deck beams replaced and a new fibreglass top laid down. The pilot house has been rebuilt to represent a very near appearance of the original. An extended foredeck shade and a new signal mast complete a stunning new look. Additional restoration work has been completed on the side and aft decks. Extensive refinishing of the saloon includes new overhead deck beams with varnish lathes. Finally, in 2011 a new stem and bow was configured to return Innisfail to her original design and profile.

On display at next month’s Palm Beach boat show, Innisfail is asking $2.95 million.