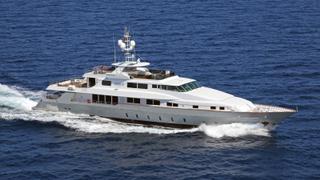 The 49.5 metre motor yacht Rima II, listed for sale by Vassilis Fotilas and Ken Burden at Fraser, has been sold with the buyer introduced by Richard Higgins at Camper & Nicholsons International.

Built in steel and aluminium by Italian yard Benetti to a design by Studio Ruggiero, Rima II was delivered in 1987. She benefits from a total rebuild in 2014 by Newcruise with an entirely new interior, bringing her up to as-new condition. Generous accommodation is for 12 guests in seven cabins consisting of a master suite with a king-sized bed, three doubles, two twins and a single ‘nanny’ cabin, all with full en suite facilities and Samsung plasma television screens.

An expansive saloon has ample seating, a full entertainment system with a large plasma screen television and a formal dining area with seating for 12 guests. Al fresco entertaining and dining is available on the large aft deck and also on the bridge deck which, during the 2014 refit, was fitted with a bar, barbecue, seating areas, Jacuzzi tub and an electric canopy for protection from the elements.