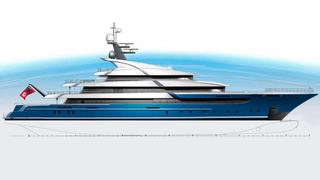 Currently in build at Turkey's Proteksan Turquoise yard to ABS class, her exterior styling is by British Naval Architect Andrew Winch. Accommodation is for up to 16 guests in eight staterooms. As currently configured, she incorporates a separate owners deck on the upper deck and six or seven guest staterooms on the main deck. Various layouts can still be accommodated and the superstructure styling remains flexible. The master suite is particularly impressive with a study, his and hers bathrooms both with bath and shower and dressing rooms, and a private deck area forward with Jacuzzi, sunpads and breakfast area

Further features include a spacious sun deck with Jacuzzi, sun pads, bar and lounging areas, a large tender garage to accommodate two tenders and an elevator to all guest decks. Her projected cruising speed is 15 knots with a range of 7,000 nautical miles at 12 knots.