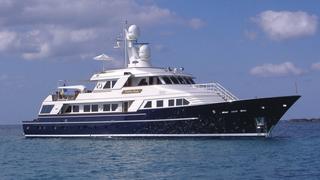 The week after Christmas usually sees some sales activity as deals are done before the end of the year, and so it is that a very happy Bob Denison at Denison Yacht Sales drops me a note about the sale of the 38.7m motor yacht Golden Rule which closed yesterday. Bob's colleague Justin Onofrietti was the listing broker and Bart Kimman from Northrop & Johnson in Hong Kong introduced the buyer.

To quote Bob's words, "This classic Feadship is an absolute treasure among the yachting community." Designed by De Voogt, she was built at the Van Lent yard in 1986. Her excellent fuel economy allows for extended cruising, with a range of 3,400nm at 11 knots.

She has been meticulously maintained by knowledgeable owners and crew since new. She completed an extensive refit in 2006, with other minor upgrades in early 2010.