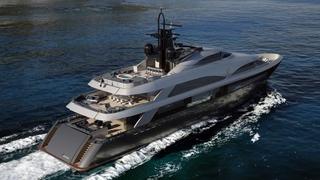 Alev Karagulle sends news that Burgess has been appointed central agents for the sale of the 55.73m motor yacht Columbus 181, currently under construction at Columbus Yachts.

Scheduled for delivery in 2013 and the second delivery from the highly regarded Palumbo Shipyard Group, this is an opportunity to step into a stylish and sleek new yacht on a tried and tested platform that's still in a position to be entirely customised to her first owner’s tastes and wishes.

Designed by HydroTec, this high volume yacht is being built to RINA Maltese Cross classification and MCA LY2 compliancy. The yacht will offer spacious and well-appointed accommodation for up to 14 guests in 6 cabins with plans for a full beam, forward facing master suite on the main deck, a light and airy VIP cabin on the upper deck, two further doubles and two twin cabins with Pullman berths on the lower deck. Special features will include a gymnasium and an elevator serving all decks.

With an asking price of €27,000,000, a model and further marketing material on the Columbus 181 will be displayed on the Burgess stand at this week’s Monaco Yacht Show.