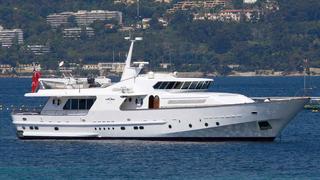 The 30.5 metre motor yacht Vespucci, sold in July 2014, has been sold again to a direct client by Charles Herve at CSO Yachts. She was not officially on the market but her owner accepted an offer.

Formerly known as Andrax, she is a displacement gentleman's yacht built in steel and aluminium by CRN Ancona for Carlo Riva to his own design and delivered in 1978. The build foreshadowed the current situation where both Riva and CRN are now members of the Ferretti Group.

Vespucci had a thorough refit in 2006 and accommodates eight guests in four cabins. The master suite is on the main deck and has a queen size bed while the VIP suite is below with a queen size bed and there are a further two twin cabins. The master and VIP suites both have full bathrooms en suite while the two twins share a connecting en suite bathroom with shower. In addition, there are quarters for four crew.

A large saloon with décor by Studio Massari in light coloured paneling has comfortable seating on two L-shaped settees plus occasional chairs and coffee tables, a bar and an entertainment centre with a large screen television and there is a formal dining area forward.

The outdoor areas offer plenty of space for al fresco entertaining and dining, with a large sheltered aft deck and an expansive flybridge.

Twin 435hp Caterpillar give her a cruising speed of 11 knots and a range of 1,650 nautical miles.