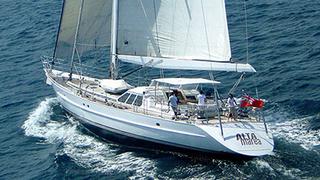 Great news just in from dahm internationl that Jochen Brill has sold the 29.45m sailing yacht Alta Marea in an in-house deal.

She was built by Jongert in 1991 to a design by Peter Sijm. This superyacht has been kept in excellent condition by her current owner with an extensive refit inside and out in 2000 and a technical refit in 2009/2010.

Alta Marea sleeps six guests in an owner's suite and two guest staterooms along with four crew in two cabins. An attractive feature is a large stern garage with hydraulic transom. A 320hp Mercedes engine gives gher a range of 2,500 nautical miles at eight knots.

She is also notable as a very quiet yacht and has massive battery banks to run silently for extended periods.