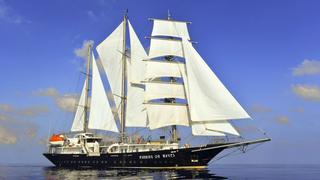 Aris Drivas at Aris Drivas Yachting sends news of an €8 million price reduction on his listing for sale, the 64 metre sailing superyacht Running on Waves.

Built by Polish superyacht yard Segel Masten Yachten and launched in 2011, Running on Waves has the elegant lines of a classic clipper ship.

She has served well as a charter yacht in the Eastern Mediterranean over the past few years. Amenities on board include a cinema, disco, conference rooms, a spa and a Jacuzzi.

A single 650hp Volvo engine gives Running on Waves a cruising speed of 8.5 knots. She is down from €32 million to €24 million.