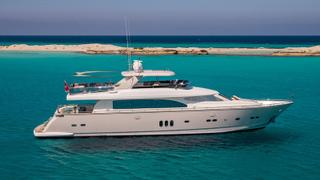 The 27.43 metre motor yacht Etoupe has been listed for sale by Steen Christensen at Fraser.

Built in GRP by Taiwanese yard Horizon,Etoupe was delivered in 2007 as an Elegance 90 model and had a major interior refit in 2017. The refit saw her receive all-new Paola Lenti and Fendi Furniture, and LED backlit Onyx throughout, including a spectacular bar and wall in the saloon. Accommodation is for six guests in three cabins comprising a master suite, VIP suite and a double cabin. All guest cabins have entertainment centres, LG television screens and en suite bathroom facilities while crew quarters sleep two members of staff aboard this yacht for sale.

A relaxing saloon has large settees and a coffee table to starboard, an onyx-clad bar and an entertainment centre including a large television screen and a Sonos surround sound stereo system. Forward is a formal dining area with seating for six guests.

Al fresco entertaining and dining is readily available on the aft deck courtesy of an oval dining table, built in bench seating and four director’s chairs. To port and starboard, stairs lead down to a wide swim platform with a hot and cold water shower. Up on the flybridge is a range of sun pads, built in semi-circular seating around a round fixed table, a bar, barbecue grill and a folding Bimini top for relief from the sun when the need arises.

Twin 2,000hp MTU diesel engines allow a cruising speed of 13 knots topping out at 20 knots and she is fitted with Trac zero speed stabilisers.